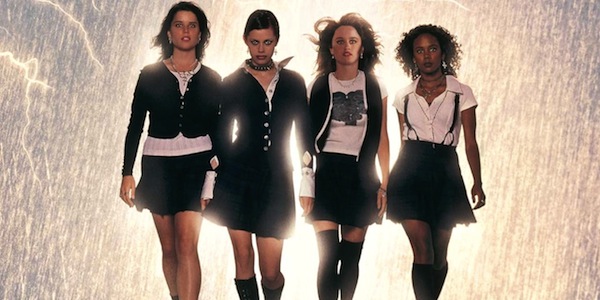 In 10th grade, I got to take what is possibly still my favorite class of all time: an elective on writing horror, science-fiction and mystery. Every year, I look for a genuinely scary movie to add to my list of favorites. I have a demonological book club with a friend just so we can have an excuse to read too much into The Exorcist. But that's my usual thing. I'm not here to steer you towards Nightmare on 13th Street, Jason vs. Jamie Lee Curtis, The Heretic. I won't tell you which book you should read next. What I am here to discuss is a list of 10 movies that are scary for non-traditional reasons. This is part satire and part acknowledgment of Hollywood scare tactics. Feel free to add your own to the list as usual. And these are in no particular order. Happy Halloween, everyone!

As I said in the intro, I love possession. I think the idea of a person being forced into literal submission by an invading spirit is one of the scariest things I can think of. I stumbled across The Exorcist one night when I was home alone in a house that was haunted and while I couldn't sleep for the next day and a half, I loved it. I own The Exorcism of Emily Rose because I love the psychology of that movie. The Possession seems at first to be Judaism's answer to The Exorcist. Girl with sucky home life starts messing with things she shouldn't oughta, girl displays mysterious behaviours, girl turns out to be possessed, girl requires an exorcism, etc. I do like the idea of the dybbuk, a dislocated spirit. So naturally, we're going to expect the climactic exorcism scene. William Peter Blatty's film version of this is an acting masterpiece, whether you believe in Christianity or not. This decade's answer to The Exorcist lays out that if you have a Hasidic in a hoodie, you can get him to yell the name of the demon until low-budget Gollum is cast out in a way that reminds me of Ghostbusters. While Father Karras had to rule out psychiatric explanations and seek permission from the archbishop... hoodieman seems to do it because, well, better nip it in the bud and we've got nothing else to do on a Saturday. I'm sorry, but I'm pretty sure that the practice of Judaism is a lot more profound than that. No, seriously, I have a lot more respect for Jewish doctrine and ritual than the screenwriters did. But no, that's not what makes this movie scary. I remember reading in that 10th-grade class a great article called "In Pursuit of Pure Horror." In it, they rounded up some of the great horror writers of the day, including the guy who wrote the book Psycho, and had them talk about how to inspire fear in the modern audience. Their idea was that Edgar Allen Poe might not get a rise out of modern readers because we're not scared of that stuff any more due to suspicion and not being so afraid for our immortal souls. They reworked "The Telltale Heart" based on contemporary fear of mental illnesses and disease and things like that. So, let's say that these people were trying to do that with The Exorcist. In this movie, the scary things are as follow: 1) The girl is anti-social. That means she will eventually come to school and kill 32 of her classmates. 2) The girl is found pigging out. She's not only going to kill everyone, she's going to have an eating disorder on top of it. 3) The girl lashes out at her bully. We've known since Carrie that self-defense means killing everyone on prom night and not allowing teachers to carry guns means that she'll come to school and kill 32 of her classmates. 4) The girl causes an infestation of insects just by opening her mouth. Admit it, we're all scared of needing an exterminator. Plus there is a certain amount of scariness to having the poor-man's Gollum forcing you to terrorise your psychiatrist with bad dentistry. I'm so scared of this movie that I'm putting in my living will that in case of demonic possession, I want William Peter Blatty to write my exorcism.

That's Kaki pronounced like the pants, thank you very much, my family nickname and writing name. I am a Red Sox-loving, Doctor Who-quoting, Shaara-reading walking string quartet of a Mormon writer from Boston. I currently work 40 hours at a stressful desk job with a salary that lets me pick up and travel to places like Ireland or Philadelphia. I have no husband or kids, but I have five nephews to keep me entertained. When not writing, working or eating too much Indian food, I'm always looking for something new to learn, whether it's French or family history.