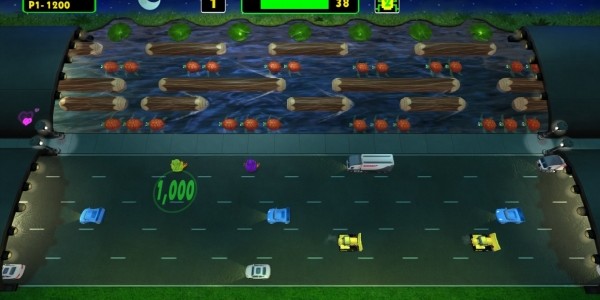 Frogger is an example of extremely simple game design. Simply put, youre a frog who has to get from point A to point B, and doing that becomes exponentially harder as time goes on. Usually, youll find a road populated with manic drivers represents the greatest threat to your ambition. This seems reasonable  if a frog gets hit by a car, youre going to need a shovel to peel him off the road. Yet its when the game begins to include rivers that things get nutty. Usually, after youve finished dodging cars on a road, youre made to run a gauntlet of floating logs to reach the Promised Land. You can understand why the game designers included this change of scenery  variety is the spice of life, and wed probably get bored if all we were doing was dodging cars. But choosing water as a dangerous obstacle just seemed silly, given the circumstances. What are those circumstances? Youre controlling a frog, you damned fool! Frogs swim like professionals and actually lay their eggs in water. They love water. One might even say they cant get enough of it. Yet we in videogame land are unlucky enough to possess the only frog who cant carry out of his birthright of graceful, glorious aquatic locomotion. Sure enough, if you miss your log he will fall straight into the drink and drown in a display of helpless buffoonery. Bloody hell, at least make an effort at something you were technically born to do.

10 Brilliant Video Games That Surprised Everyone

GTA 6 Wishlist: 10 Biggest Items We Most Want To See

10 Video Game Moments That Made Everyone Uncomfortable

14 Video Games You Should Never EVER Play