In the early 90s it was apparently very cool to wear bright colours and rap about positive things while still using the word funky. ToeJam and Earl, the tale of two rappin aliens from outer space, was a sleeper hit for the Sega Genesis after its release in 1991. The game started a trilogy of games that lasted over 10 years, but has since been left to gather dust in the gaming vault of yesteryear. The first thing that stands out about ToeJam & Earl is the stylistic choice taken by the games designers. The game is very, very late 80s/early 90s. It was a brave move to place the art design at the cutting edge of cool (think Saved By The Bell meets The Fresh Prince of Bel Air in cartoon format, with aliens). This aesthetic hits the player from the outset; the intro animation, explaining the events leading up to the game is a bright mess of pink triangles and throbbing rectangles, all to the low-fi beats that represent hip-hop before it got super tough and self-applauding. 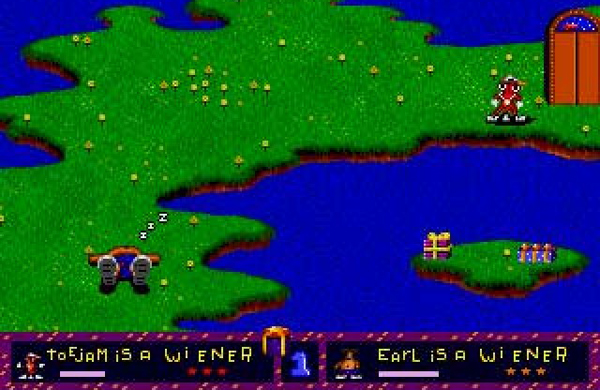 The story is pretty basic but thats not the reason anyone is playing. Our alien protagonists came across a problem while they were cruising around space, crankin out the funky tunes. The problem was that Earl wanted to drive. Earl crashes the ship into a planet called Earth, yet it bears little resemblance to the one Ive been living on. So our title characters find themselves in a strange and distant land with the intension of fixing their forlorn spacecraft by finding the ten pieces it has been broken into. ToeJam is a three-legged, slim red alien who wears a cool medallion and baseball cap on backwards! Earl is his chubby orange friend, who is a lot slower walking around the game world. Earl wears sunglasses and what look like boxer shorts, which is strange as ToeJam appears to be nude by that standard.

The gameplay is based around exploring the randomly generated levels from a top-down perspective, a little like Bastion but with a lot less polish. Either playing in single player or two players as the game is designed for, you walk around the levels looking for the pieces of the ship. There are randomly generated items to be found scattered around the world in the form of wrapped gifts. Potential items include; Sprint Shoes, Tomatoes (which can be thrown at bad guys), Super Hi-tops (which allow fast running and jumping) and Innertubes (which allows for swimming). The idea is to explore each level, which may or may not contain a piece of the ship. After explore enough the players can enter a lift which will take them upwards to the next level. Each level is surrounded by space which if fallen off of, the player will descend to the previous level. There are a healthy helping of baddies to hinder the progress, getting progressively more difficult as the players ascend higher and higher.

The game is crammed full of humour and surreal situations, which add to the free feeling and invite the players to progress. This was certainly a game to be played with a friend as the slow pace and relaxed gameplay allowed for chatting and imagination. One of my fondest memories of the game was an Easter Egg. On the very first level of the game there was an island, but this was only reachable by water, so the players would need to go up enough levels to get the right amount of Innertubes. Once these were attained a friend and I would descend back to the first level and make the long swim to the island. On the island was nothing but a black whole, but if we jumped through this whole was would get to a new hidden level. In this secret level there was nothing but a lemonade stand and a hot tub with sexy ladies in; this was the most exciting thing ever, for a eight year old.

The slow success of ToeJam & Earl spawned a sequel which saw our ill-fated freinds return to their native planet in ToeJam & Earl in Panic on Funkotron. The sequel abandoned the free, top-down, randomly generated level design in favour of a 2D side scrolling platforming. The gamers creators originally wanted keep with the same style as the first game but Sega did not support this idea, pushing them in the direction of a more generic style of gameplay, and look what happened to Sega. The game sold well but confused fans. 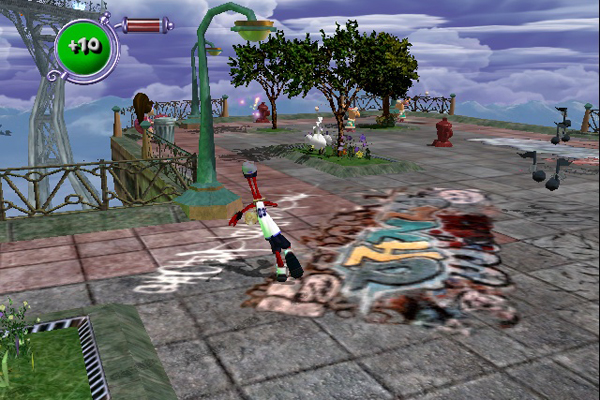 After years of laying dormant ToeJam & Earl III: Mission to Earth took the saga into the realm of 3D and onto a much more advance generation of console in 2002. As with most games trying to take the dimensional leap, the series third instalment did not do too well. Poor sales and mixed reviews meant that this was probably the end of the series. It is an obvious problem for a game that is so set in the early 90s to try and revamp itself for the early 00s, with the addition of a new female lead in the form of Latisha and various other innovations did little to help ToeJam & Earl survive another console generation. The original game saw its obligatory release onto Nintendos Virtual Console in 2006, but this looks to be the last outing for our alien friends. Unless another developer wants to take on the ToeJam & Earl mantle, things dont look great for the franchise future, mainly because ToeJam & Earl Productions, Inc. no longer exists. Although Funkotron may never be reincarnated, we can still bask in the memories of exploring the grassy lands that made up the random worlds of the first game. A truly forgotten gem that peaked too early, word!

Star Wars Jedi: Fallen Order 2 - 10 Things The Sequel MUST Include

Want to write about retro and ToeJam & Earl? Get started below...
Contributor
Robert Nichol
Contributor
Twitter