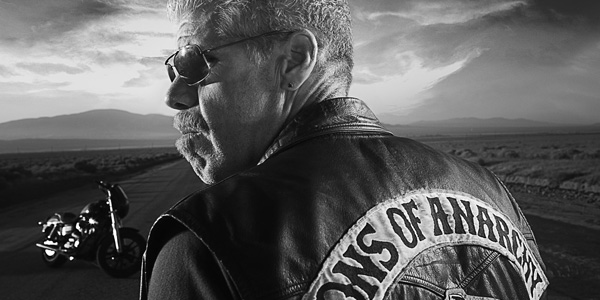 Sons Of Anarchy fans are eagerly awaiting Season 6 to hit the screen, and with the new season not set to air until September 10th we all need something to feast on until this time comes. I have been so addicted to this show from episode one. The storylines are phenomenal and the acting is brilliant, with some well-known faces in the show, the cast is a mixture of fresh talent and household names. Sons Of Anarchy is based around family, the good and the ugly mixed with a side of violence and criminal activity. A concurrent theme throughout the series is the idea of an end game, whether it is stability, money, or notoriety each character has their own idea of what they want outside of the gang and how they would like to live if they were ever to lead normal lives. Throughout the show we see the main protagonist Jax Teller with the hopes and aspirations to get out of the gang eventually and live a quiet and happy life with his wife and two sons. Clay Morrow, one of the founding and original members has a completely different end game; Clay wants a steady cash flow for himself and the notoriety that derives from association with the brotherhood. No character has yet reached their end game as the club is firmly in their blood, this makes for extremely addictive viewing as the audience are so invested in each character and how their stories will play out. Sons of Anarchy is the epitome of binge television, each episode and season finale is left on a cliff hanger with the writers making it impossible for the viewer to not want to see what happens next. The narrative is such a far cry from the usual goings on of your average person (I would hope!), which increases the shows popularity as an audience loves escapism. We like to spend an hour in a totally different world, completely contrasting to our own and are fascinated by how other people live and the idea of peeking into a realm that we could never step into in reality. I am always digging for facts from my favourite television shows in between seasons, I need some sort of interaction with the show while its off air to ease the pain. Upon doing so I have come across some little beauties which I have shared with fellow SOA fans and would like to share with you. Be prepared to have your mind blown

Lady from Liverpool, UK with a BA in English Literature and American Studies currently residing in lovely Melbourne, Australia. Writing and indulging in everything music and television from Kanye West to True Blood. If your a TV fanatic, music lover or just want to have a little nose at what I have to say, check out my blog at aleafoutofhollysbook.wordpress.com

Doctor Who: 10 Most Terrifying NuWho Monsters