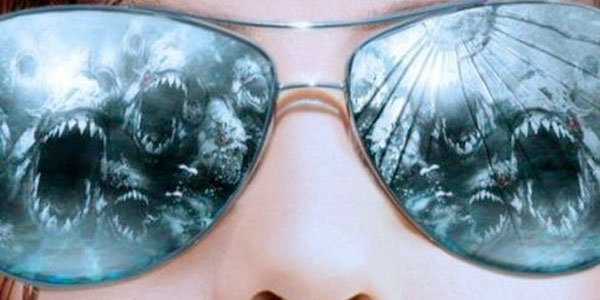 Just when you thought it was safe to go back into the water... or even the bathtub. Dimension Films have released the first official trailer for Piranha 3DD, the sequel to Alex Aja's utterly silly but cheesy fun Piranha 3D that became a huge box office smash in the summer of 2010. From the looks of the trailer it is as true a sequel as you were ebver likely to find with the selling concept still revolving around big boobs, big round asses, sexual innuendos, B-movie actors giving parody like performances and big teethed CGI piranhas and a rip-off of every moment in Jaws. Though no the universe seems to be expanding from water and into our characters home. The Piranha's are spreading! You can watch the trailer below; The trailer may also end up giving execs the idea that David Hasselhoff could still pull off a Baywatch movie. Written by and directed by John Gulager, Piranha 3DD is likely to hit around August time but no official date has yet been given. The film stars Danielle Panabaker, Matt Bush, Chris Zylka, David Koechner, Meagan Tandy, Paul James Jordan, Jean-Luc Bilodeau, Hector Jimenez, Adrian Martinez, Clu Gulager, Gary Busey, Katrina Bowden, Ving Rhames, Christopher Lloyd and Paul Scheer.

Having awoken from their spring break extravaganza at Lake Victoria, the swarm heads upstream where they look to make a meal out of Big Wet, a local water park where when it comes to fun, nobody does it wetter! Thought they came to get wet, get loaded and get some, the staff and patrons get more than they bargained for when they must face the fiercest, most bloodthirsty piranhas yet. Lead by the strong-willed, studious Maddy and her friends, Barry and Kyle, the trio must dive in and take on these man-eating creatures using every ounce of their being...but can they be stopped?

10 Insane Movies You Won’t Believe Are Being Made

10 Movies That Aren’t As Bad As Everyone Says

10 Best Westerns NOT Set In The Old West

10 Horror Movie Creature Features That Broke All The Rules