Touch is a very unique show. Unique in its storytelling and especially in its overall positive outlook, something made even more apparent when in contrast with the current TV climate of darkness and cynicism. Yes, its theme of interconnectivity (lifted straight from Tim Kring's previous project, Heroes) is mushy and fluffy, but it really is a welcome change. In its uneven first season, this put many people off but attracted a dedicated few who sang the shows praises. Whilst I am one of those fans, even I have to admit that come the seasons end, Touch's tireless dedication to a formula started to verge on 'wearing thin'. Luckily, as that season was ending, Touch increasinlgy brought an interesting and compelling mythological arc for the forefront, one that it could run with going into its 2nd season. And run with it it does. This is one of many aspects of Touch that add to an overall 'revamped' feel for the show. Gone are the self contained weekly cases of people across the world being connected in some way, some how. Instead, we get a continuation of what built gradually throughout the second half of the season: Martin Bohm (Kiefer Sutherland) and his gifted son, Jake (David Mazouz), are on the run from super evil Aster Corporation. This company are, for uknown reasons, trying to kidnap people like Jake. That is, people who can see how everything and everyone are connected - through numbers. Many of them also seem to have a tendency to be quiet. Very quiet. As in mute. 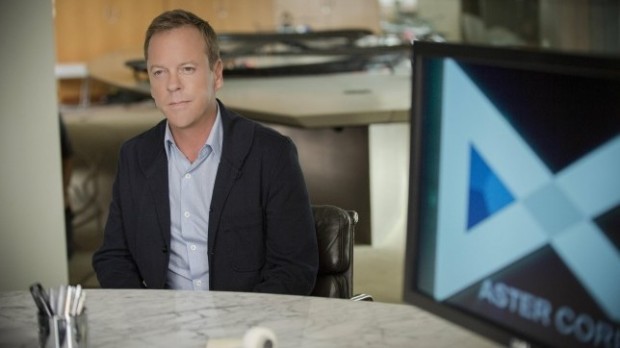 Jake has lead Martin to LA in order to locate a girl like him, Amelia (through the 'Amelia sequence' of numbers) who the Aster Corporation have kidnapped and made people to believe is dead. Here they meet, not by chance but by fate, Lucy (Maria Bello), mother of Amelia (Saxon Sharbino). Bringing the search for Amelia and the big bad company to the fore means a new sense of urgency the show didn't have before. A sense of danger and a sense of purpose. A lot more happens.Both in terms of action and story. It really does make an already entertaining show that bit more enjoyable. There's a feeling of action/adventure to the opening two episodes, and it's a welcome change. Let's not forget this also means Kiefer gets the chance to be badass from time to time, and that's never a bad thing. The change of City to LA also means a new hub for our favourite father and son pairing: a weird, trendy hacker/journalist office called Breakwire. It's full of various technophiles and genius computer men, all at Martin's disposal for when he wants to track someone, or something, down. Not only has the format, location and content of the show shifted, but there's also the introduction of some very interesting new characters. None more so than Guillermo Ortiz (Said Taghmaoui), a slightly-psychotic religious man who is hunting down and killing the 'Righteous 36', the people like Jake and Amelia who see the connections. He's compelling from the moment we see him slice a musician, but it's in the second episode that his world really opens up. Upon meeting a female artist, he bonds with her in a fairly deep way. They clearly like each other. However, Guillermo is an intensely religious man and fate is fate - so he kills her, as per the original plan. This really added another layer of depth and intrigue to the character. He isn't simply The Terminator, he's a man who believes in something and believes that he has no choice - no one can get in the way of gods work. He is really creepy though. And scary. And a complete sociopath.

Guillermo's scenes are the biggest indicator of a slight tonal shift in these opening two episodes, who could imagine a man slitting a womans throat in the first season? Not only that, but the blood from said slitting literally hitting the glass on her door? It's not gratuitous or over done, it's just one scene, and it adds a real feeling of present danger. Especially as we know Jake is on Guillermo's list... Another interesting new character is Calvin Norburg (Lukas Haas), a young genius working (reluctantly) for Aster Corporation in generating algorithims for their top secret work. Calvin is so reluctant in his working for them that he goes off script in a public speech for the company, in which he spouts a very interesting story about what would happen if the company uses his numbers. What he describes sounds very much like a Terminator-esque post judgement day dystopia. Seriously, he even uses the word 'dystopia'. Very interesting. However, in the right hands it would solve all the worlds major issues and bring about peace. See? That sounds much nicer. I'm torn here. Can't we see both outcomes? Then, in a twist I didn't see coming, we discover that it is actually Calvin who is keeping Amelia. Why? I'm not entirely sure. He is seperated from the corporation now, so what is his motive? Is she leverage over them? Or is he hoping to do his own experiments on her? Amelia is then given a new babysitter, an older woman of whom we know little about. All we know is that she ups and leaves her old life as a librarian suddenly in order to look after this girl. I look forward to hearing her story. As it turns out, this woman's partner shares a connection (of course she does!) to Jake and Martin: he is the grandfather of Soleil, the cute little girl whom Jake has bonded with over fairground rides and one-way conversations. The best and most important thing about all this revamping, aside from it being necessary, is that the heart of the show remains intact. The shows central idea, its theme and feeling - it's all still there. It maintains the refreshing positivity it always had, just new and improved with a much needed kick. Even those beautiful opening titles have been given a lick of paint, with some added layers to the music and teasing images from upcoming episodes.

We finish the second episode with Calvin, the man holding Amelia, agreeing to talk to Martin about Aster. As Martin notes, we certainly are getting 'closer'. Overall, this was a fantastic two-part opener to Season 2 of Touch. I was already a fan of this unique show, but it definitely needed to evolve in some way going into its second year, and it's done so successfully. I can't wait to see where they take us from here. What are Aster Cor. up to? What does Calvin want with Amelia? What is the librarian's connection to all of this? Let me know your thoughts on these questions and more in the comments. Unfortunately, due to the show being left for dead by FOX (premiere date delayed numerous times, graveyard slot and little promotion) the ratings aren't good and it's almost certain that the show will not last beyond this season. However, I am determined to enjoy it while we still can. Touch fans are hard to find, if there's any out there who would like to engage in some discussion, please, tell me so in the comments or follow me on twitter. The next episode, 2.03 'Enemy of My Enemy', airs next Friday. My review will be up soon after.

I am a student studying Media, Writing & Production at the University of Bolton. Film/TV/Reading+Writing enthusiast.

Why Supergirl Just Got Cancelled

Bet You Can't Name All These Characters From The Boys!

Only A True Brooklyn Nine-Nine Fan Can Score 20/20 On This Amy Santiago Quiz!

Brooklyn Nine-Nine Quiz: Who Am I?

10 Stargate Storylines That Were Never Resolved

The HARDEST Chandler Bing Friends Quiz On The Internet!

10 Most Shocking Moments On ER

Friends Quiz: Who Said This To Monica - Rachel Or Phoebe?