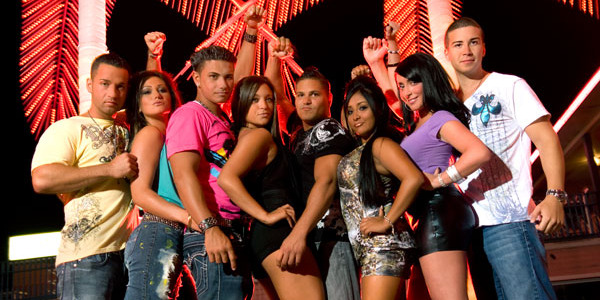 I know Jersey Shore, well, was WASHED ASHORE a few months a go but after watching MTV's 'boxset reruns' over the past few weeks, I've come to wonder why, and how, the show stayed on the air for so long. Don't get me wrong, I LOVED Jersey Shore, but I'm definitely not the kind of fan who wants to see my favourite shows on tv regardless of their quality. In fact, I think dragging certain premises well past their sell-by date can pretty much ruin one's memory of the good years. Whilst I don't think Jersey Shore was 'ruined', as such, I do think it went a bit stale, sometime around Season 4 and 5, and really, made little to no effort to revitalise itself before calling the final curtain last summer.

5. They Got Famous. World Famous!

http://www.youtube.com/watch?v=OlwaMzSrwQI I was, surprisingly, taken aback after finding this Youtube video  of the 'macaroni rascals' filming in Seaside  to see the cast were being absolutely hounded by crowds of followers. Okay, Im not completely stupid; of course I knew theyd be known in Seaside. However, I didnt think theyd be such an event as to amass a swarm of followers wherever they went. Another thing I realised was that this was during the filming of Season Three, so it was relatively early on. This means that, at least, three out of six seasons were almost completely staged or heavily coordinated. There is also some footage of them on the fair rides, where there are all sitting in their own cart (on the Waltzer). I dont really know why, I guess for filming purposes. With all this, Id assume going outside would be a bit of an ordeal for the cast and that they probably absolutely dreaded going on the boardwalk. After seeing this, I have to admit, I lost a bit of enthusiasm for the series. I know reality television is never 100% real but it just looked all so orchestrated. They are also seen hanging out at the beach with a circle of drooling fans physically forming a parameter around them, with a mere ten foot distance between them. Is that even legal? Seriously, no wonder these guys got paid so much money per episode. It seems more like a prison stretch than a summer holiday with your mates. Anyway, the point is that once they became this famous, like ridiculously so, the charm of the original premise diminished for sure and it is all but lost by Season Five and Six.
Quizzes

Hey, I'm Deneo, I'm from Edinburgh, Scotland, in the UK, and have recently graduated from university as a student of sociology and culture. Over the course of my uni degree, I have become interested in socio-cultural discussion of just about anything and enjoy trying to apply it to pop culture topics, such as tv, film and music.