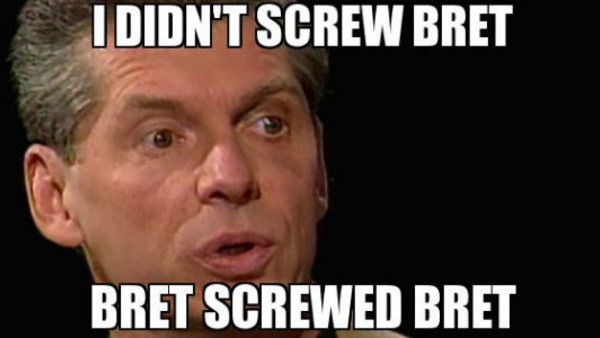 1997 is widely viewed as one of the most entertaining years in Monday Night Raw history. Not only was "Stone Cold" Steve Austin catapulted into superstardom that year, but the entire Shawn Michaels Vs Bret Hart feud had gotten really heated and personal, eventually giving us the birth of the Mr. McMahon character. The Attitude Era was definitely in full swing, and even though they weren't winning in the television ratings (Raw only beat Nitro five times in all of 1997), WWF was absolutely on fire, and the product was really rounding into shape. The show's fifth year on the air saw a drastic and dramatic shift in mature content, as the aforementioned Attitude Era really began to change the way pro wrestling was presented. More characters, gimmicks and stories that pushed the envelope and helped to finally turn the tide for the WWF and helped them to "win" the "war". You have to remember, there was a time when things looked bleak for the company with WCW having so much momentum with the nWo, as well as their financial backing from Ted Turner. Here are the ten most memorable Raw moments from a jam-packed 1997 calendar year.

Why Vince McMahon Has Failed To Kill AEW

WWE Royal Rumble 2020: Predicting All 34 Wrestlers Not Yet Announced