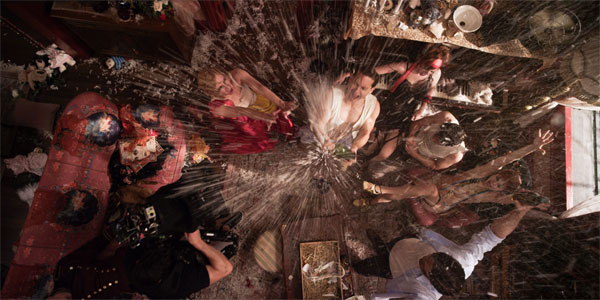 F. Scott Fitzgeralds 1925 novel The Great Gatsby was published to great acclaim at the height of The Roaring Twenties. Today the book is still regarded as a literary classic and has been widely adapted into films, ballets and even computer games.

The novel paints a vivid picture of 1920s New York, a world inhabited by flappers, moonshine and wild parties. A central part of the books plot revolves around the extravagant parties thrown every weekend by Jay Gatsby in which people from all areas of society went to drink, dance and mingle. The character of Gatsby is an eccentric and mysterious man whose obsession for his lost love, Daisy, drove him to become a self made millionaire in a strategically orchestrated bid to impress her. Gatsbys parties were all thrown in the hopes that Daisy would one day walk through the door.

The parties were wild and decadent and all were welcome. Each weekend a mass migration of all manner of different types of people from central New York to Gatsbys gigantic house would occur.

This article takes a collection of 10 real life historical figures who you might have found at one of the Great Gatsbys parties, a crazy cocktail of Gangsters, Actresses and Eloping Evangelists.

Recent History graduate living in Newcastle. I like to travel and experience new things, my favourite place on earth has got to be the Great Barrier Reef. To date my greatest achievements include completing the National Pokedex and mastering how to make cheesy nachos.

How Death Row Is Different Around The World

9 Crazy Mysteries Solved On The Internet