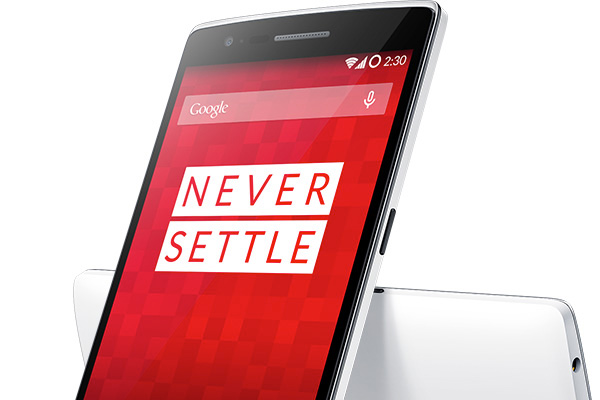 Due for a new smartphone this year? You'll want to read the following article. With so much choice these days, finding the perfect phone can be daunting. And 2014 is certainly shaping up to be a busy year in the smart-phone industry. While there's some interesting developments in the Android market such as the OnePlus One, Apple are certain not to want to lose any further ground, so the much-anticipated iPhone 6 announcement (expected in the Autumn) is sure to make waves.

The last couple of years have witnessed some phones that have genuinely disrupted the market, with brilliant specifications and reasonable price tags: the LG G2, the Nexus 5 and the Moto X are prime examples. One phone which might surpass them all is the newly released OnePlus One. OnePlus will be a manufacturer most readers arent familiar with, and the One Plus One is the first phone the company has produced. The OnePlus One is also the first phone to have the tweaked Android ROM known as CyanogenMod pre-installed, but its the awesome technical spec thatll grab the attention of most readers. The phone has 3GB RAM, a 13MP camera, a 2.5GHz Snapdragon Quad Core processor, 4k recording, and razor sharp HD display which delivers a phenomenal 401ppi on a 5.5inch screen. We know Android users tend to like bigger screens, and this large but elegant phone is set to be a real favourite in tech circles. In terms of design, the phone might not have the solid craftsmanship or pricey materials of the HTC One or iPhone5, but its ultra-sleek and definitely one of the best looking phones on the market. The price of this phone is truly revolutionary; this much technology should surely command a premium price tag, but the OnePlus One will remarkably enter the market for a mid-range fee. The OnePlus One is the kind of phone that disturbs market equilibrium, forcing incumbent producers to raise their game to justify premium price tags.

The Galaxy Note 4 doesnt arrive with the fanfare of the Galaxy S5, but it does represent one of the companys most prized products  especially in the Asian markets. The Galaxy Note 3 was a huge success and at 5.7inches it occupies an important niche market. The term phablet seems to define its point in the market, and for many modern users it seems eminently sensible to have a phone this size. Lets face it, a tablet might be portable around the home, but youd certainly never take it to the pub. The Note 3 was huge, but itd sit nicely in your pocket or handbag, only looking slightly unwieldy when you took it out to make a call. The Note 4 is probably not a device for text addicts or social networkers; its more of a device for multimedia functions such as photo-editing, work, films and games. For practical purposes, the Galaxy Notes incredible S Pen is truly revolutionary. Perhaps the Note 4 will have a slightly larger 6inch screen now that smartphones are getting bigger (notice the 5.5inch offering from OnePlus in the review above). Its been speculated that the Note 4 might have a curved screen and a 20MP camera, making it a joy for photographers, but well have to wait and see if thats true. There is competition to the Note 4 in the form of the Xperia Z Ultra, but Samsung seems to have dominion over the phablet market and its easy to see why. The Note 4 could genuinely become Samsungs flagship product, and they might really go to town on the spec in anticipation of the oft mooted Apple iPhablet.

Speculating about the credentials of the latest iPhone has become an annual sport, but you get the feeling that Apple need to up their game after a slightly flat reception for their previous phones. The iPhone5s was excellent, and strikingly good looking  but it offered little to capture the imagination. The idea that the iPhone6 might have a wraparound screen is often ventured on forums, by people who seem to be in the know, and this really is a glimpse of the future. The sides of the phone could be touchscreen which would add functionality, and as much as anything, a hugely striking aesthetic. A bigger screen seems inevitable and the introduction of iOS8 will come with the phones release. Quad HD resolution would be a nice feature, but again, well have to wait and see. One effective gimmick could be to release the new iPhone alongside an iPhablet, which would measure around 5.5inches, similar to the way Apple released the iPhone5s and 5c last year. You may have to wait until the end of the summer for the eighth generation iPhone6, but you can guarantee that whatever product Apple release, itll be supremely elegant and ultimately intuitive.

The LG G2 put LG firmly back on the map as a phone manufacturer, with its mighty spec and reasonable price tag. It may not have had the finesse of its high-end Apple and Samsung rivals, but it had everything else, including: a high resolution display, a brilliant camera, 5.2inch screen, 2.26GHz processor, 13MP camera, a determined battery and 2GB of RAM. For a contract price cheaper than the Samsung Galaxy S4 or the iPhone5s, most people considered the LG G2 to be the wise buy. The LG G3 looks to take the game up a level, and a Quad HD screen is being touted as the phones major selling point. The display could measure around 5.5inches, which would trump the flagship smartphones of both Samsung and Apple. 5.5inches is really starting to reach the top end of the spectrum, before we venture into phablet territory, and it looks like this size could become something of a benchmark for competitive Android phones. A 13MP camera and 4k recording capabilities could just sway potential buyers towards the LG G3 which could launch just before mid-summer making current contract prices on the G2 even more pocket-friendly.

The Moto X was a near perfect smartphone, considering its very reasonable price tag. The Moto X was a real tech fans phone, just as Motorola had intended it to be. The processing chip was sufficient with a 1.7GHz Krait chip, and its 2GB of RAM put it firmly in the high-end bracket. The overall User Experience (UX) was practically as good as any phone on the market, with Touchless Control and a brilliant interface. The camera wasnt ideal (although it certainly wasnt bad), and the phones overtly plasticy quality might have wrongly made the Moto X appear less solid than other phones, but all of these perceived defects should be ironed out on the Moto X2. If youre after a phone that really suits a limited budget but offers a high spec, the Moto X2 will definitely satisfy your needs, but you may have to wait until late summer for its release. If you cant wait for the X2, the Moto X is becoming even more cost friendly in the meantime. So, it appears youve got plenty of thinking to do when you come to choose a phone in 2014. The relative merits of each of these smartphones make any one stand out from the pack. In terms of ground breaking tech - wraparound screens, 5inch+ dimensions, wearable fitness accessories, and Quad HD could all become the flavour of the day. We compiled the above list as the phones included stood out as having extraordinary potential, but a couple of other phones also deserve special mention including the impending Amazon phone, the Galaxy S5 and the Blackberry Q20. The choice certainly doesnt seem as simple as in previous years when Samsung and Apple appeared to be the sole pioneers of mobile tech, and we could see brand loyalty to these two giants really begin to waver.
Contributor
WhatCulture
Contributor
Twitter

8 Ways To Tell If You're A Psychopath

12 Hacks For A Mind-Blowing Sex Life

7 Happy Movie Endings That Are Totally Ruined By Science

10 Theories Why We Haven't Discovered Aliens Yet

10 Biggest Unexplained Mysteries Of The Universe