The sweet melodic tones of the charming nursery rhymes you sung during your childhood as you skipped round the playground are probably still on the tip of your tongue. As you joyously laughed and played with your friends, chanting ring around the rosy or lady bird lady bird, nothing could ruin that beautiful image of your blissful youth. Nothing. Nothing... until you actually look into what these cute tales of insects and flowers actually mean; they say ignorance is bliss, and it truly is when it comes to the meaning behind the nursery rhyme. While some help children learn the art of counting, rhythm, or are just total nonsense (hickory dickory what?), we have managed to compile a list of nursery rhymes that are troubling from the first lyric, and will make you see lady birds and church bells in an entirely different light. Still reeling from finding out Santa isnt real and fairies dont live at the bottom of your garden? Well that is nothing compared to what you are about to find out about your favourite play time jingle; that they were all in fact tales of woe and despair. Oh, and death, a whole load of death. 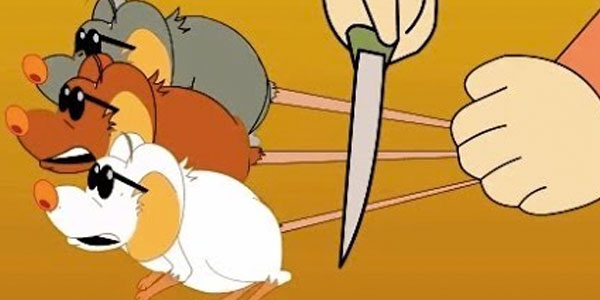 In this role play of despair the three blind mice are reference to the three nobleman who adhered to the protestant faith during the reign of Mary I, and were therefore convicted against plotting against the queen, who is represented by the farmers wife. To be fair  she didnt actually have them dismembered and blinded like the rhyme suggests - they just burnt at the stake, so no biggy.
Contributor
Sophia Parsons
Contributor
Twitter
Facebook

Sophia Parsons hasn't written a bio just yet, but if they had... it would appear here.

10 Disturbing Movie Moments That Came Out Of NOWHERE

10 Worst Ways People Have Been Tortured To Death

12 World War II Moments (That Hardly Anybody Ever Talks About)

10 Historical Lies You Totally Fell For

10 Celebrities Who Were Murdered By Their Own Fans

8 Hidden Secrets In The Mona Lisa

10 Serial Killers Who Turned Themselves In

10 Absolute Worst Ways To Die According To Science

10 Theories Why We Haven't Discovered Aliens Yet