Undoubtedly the most expensive section of our now yearly Christmas Gift Guide, the tech chapter is nevertheless an important part of what we do here, and since there are just two weeks until Christmas arrives, when's a better time to go live? But it's not all about throwing money at the latest tech and gadgetry on the market to keep up with the trend-setters with their big silly headphones and tamagotchis and that, it's about suggesting the best, as well as the best priced options to our readers. Quality without necessarily having to shell out thousands. So, with Santa's sack now carrying more techy heaven products than ever before, here are our suggestions for this year's tech-savvy gift receiver. 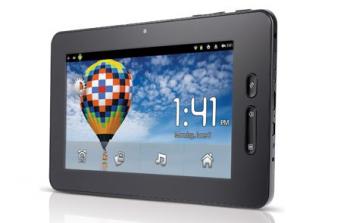 Hardly one of the mega-famous names on the tablet market at the minute, but you don't win an award from the Gadget Show for nothing, and the Scroll Excell, to give it a more palatable name for now is a wonderful bit of kit at a relatively ludicrous low price. The system itself is a touch of refined, precise genius - simple enough to be wholly accessible, and incredibly easy to set-up thanks to limited mechanics and an incomplex set-up wizard to cater for most needs (and the option to bin it for those who like to fly solo). We have to be honest here, the Storage Options tablet is aimed squarely at the lower end of the market, to offer an accessible, affordable alternative to the swankier "named brands" at the top end. In that respect, you can do no better than pick one up. But, this model is infact far more than that - because this little tablet has it's eyes set firmly on the sky, incorporating 3D compatibility and full 1080 HD output as well as everything you'd expect from a laptop. You can pick one up here for just £129.99

And then there's the iPad 2 for those of you looking to spend a little (or in fact a lot) more on a tablet. It's of course part of the hugely impressive Apple stable, and thus carries all of the positive caviats associated with that behemoth company. Astonishingly, Mac's are still viewed with suspicion among some personal computer users, and the price is often a stumbling block, but the iPad 2 deserves its position at the top of the tree for tablets this Christmas. It is a Rolls Royce of a machine, made essential by the fantastic mechanics beneath its simple, perfectly designed exterior and it will take something incredible to stop the tablet from taking on the same kind of market share as the iPod has managed in the MP3 player world. If you have the money, invest in one. And you can do so here.

So good we featured it twice, with recommendations here and in the Gaming section of this year's gift guide. With this week's revelations of the brand new features available to XBox Live users, the best-selling console of 2011 just got that little bit more essential. Now, with the system more akin to a content-packed universal media box, those who choose to invest are getting a lot more at the entry level than ever before, and a slice of the future as Microsoft have integrated multiple platforms under one banner, and evolved the way social networking links to the entertainment experience. All that's missing now is the ability to play Blu-rays. Surely they'll have to sort something out there for the next console. And further integrated cloud storage wouldn't go amiss either. Still, even without those two developments just yet, the 360 remains the console to beat. You can buy one here. And we suggest you try the uDraw peripheral as well for another new gaming experience.

Peripheral of the year, and now thanks to those just mentioned updates to the XBox Live world, so much more than a gaming peripheral, with new opportunities in media interaction and control through voice control and movement control. You are the controller, Live proclaims, and thanks to this still very impressive bit of tech conventional TV remotes might become a thing of the past in connection to the 360. With the promise of deeper gaming experiences coming in the next year, with the new Fable leading the excitement charts for me, the tech will also finally be matched with less gimmicky, more immersive content. And that can only be a good thing, so get on board now. Pick one up here.

A professional camera for the price of an amateur one, and with the kind of incredible functionality that will make it the most accessible option to any and every aspiring David Hockney, the Nikon 1 is the photographic hero of the year. With a stripped back interface and menus, and an obviously concentrated effort to offer an incomplex experience which more than makes up for the relative limitations in resolution with an overall quality that will delight. If you have a snapper in the family, it's a genuinely impressive bit of kit, and offers a broad and accessible experience that doesn't compromise on the quality of the final image. A winner in short. Buy one here for a wallet saving £429.

Gorgeous headphones from the king's of ice-cool audio accessories, Bowers & Wilkins. As an added bonus, these little beauties fit snuggly in the ear, despite looking slightly unwieldy, and the slightly odd-looking wire set-up keeps them in even with the most vigorous head-banging. And more importantly, the sound quality that comes through them is lush and rich, with heavy-hitting base, and far less "lost" audio to stop those irritated looks from fellow commuters. They might be a little pricey, but quality is expensive these days, and they're a massive improvement over the iPod's headphones, which any sane person would bin to make way for them. And while everyone else is looking at cover-all cans - like the exceptional but comically massive Monster Beats by Dr Dre - you can enjoy listening to music on public transport without looking like a bit of a knob. Buy a set here.

Exceptional performance, exceptionally low price for the quality. The HD Exchange is a webcam designed specifically and optimized for the most popular instant messaging applications including MSN Messenger, Skype, Yahoo! Messenger and AIM. The camera boasts impressively high video resolution and photo resolution (3 megapixels) as well as incredibly smooth images with up to 30 frames per second. There's also an effects software included that allows you to manipulate images and videos post-production style. Buy one here.

Undoubtedly the slickest looking mouse released this year, the 3KJ-00003 is yet another triumph of Microsoft design, and it of course marries that design with a clutter-free lack of wires. Always important these days when computer desks can have a distinctly over-populated feel with peripherals and external hard-drives and whatnot, and most importantly the functionality again matches the lofty aesthetic aspirations of the design. Pick one up here.

Come on, why wouldn't you? It's Star Wars and it's Lego. I can't think of a cooler way to wake yourself up in the morning that doesn't involve some sort of potentially catastrophic Wallace & Gromit style contraption. And my past experience of inventing heavy-duty machinery isn't exactly unblemished... Buy one of these 24cm tall little beauties here for £24.99

The stand-out phone of the year - and that's some going considering the iPhone 4S was unveiled to the world as Steve Job's supposed legacy. The Galaxy SII is a triumph of handheld technology, powered by a dual-core, and it is as beautifully sleek as it is thin and lightweight, which will inevitably score it extra points with smart-phone buyers. If you have the money to invest, it is certainly the best high-end kit on the market with the best screen by some distance - if we had some kind of award for the best phone around these parts, it would go to the Galaxy SII, swiftly followed by my hero of a Blackberry which survived for seven months after being dropped entirely down the toilet. Yes the iPhone 4S has the seriously impressive Siri, with it's luxurious Peter Dixon style vocals, but the SII is a more impressive set altogether. Buy a Samsung Galaxy SII here.

£25.15. Seriously, that's not a lot of money at all, especially for such an impressively sized audio set-up. These three PC speakers - 2 satellite speakers and a subwoofer, with a wired remote with volume control and a line input to connect an MP3 player or an additional audio source, offer an unblemished high quality sound, and look wonderful thanks to a funky arched design. Buy your own set here.

Yet another hugely impressive bit of audio kit from Hercules, this sound bar clips onto the top of any laptop screen, without compromising the camera, with connectivity through a USB cable and a heavy hitting, clear sound that will suit all audio needs. And at the price that this is available, you can't get much better. A great, unique way of boosting the sound of your laptop. Pick one up here. So there we have it, another year another Christmas Gift Guide. We hope you've found it helpful, and will come back next year for the 2012 edition. Until then, keep it WhatCulture.com
We need more writers about Christmas Gift Guide, Xbox 360, Kinect, Nikon 1, iPad 2, Storage Options Scroll Excell Tablet, Bowers & Wilkins c5 Headphones, Hercules HD Exchange Webcam, Microsoft Touch Mouse, Darth Vader Lego Alarm Clock, Samsung Galaxy SII, Hercules Arc White Speakers, Hercules Sound Bar and No Ads! Get started below...
Contributor
Simon Gallagher
Contributor
Twitter

8 Hidden Secrets In The Mona Lisa

10 Worst Ways People Have Been Tortured To Death