"The medium is the message"- Marshall McLuhan Recently, I have fallen into a bit of a Slenderman groove. I am sure this will be met with a lot of eyerolling because I am about four years late to this party but as a creation, Slenderman is a fascinating phenomenon. Despite being visually creepy, Slenderman highlights the strength and weaknesses of the Internet simultaneously. In fact, I think Slenderman is a subversive masterpiece in terms of monster creation. Of course when Victor Surge first created him, he was just a creepy picture with minimal back story. Now he is a cultural phenomenon and terrorises the dreams and thoughts of many. What makes Slenderman a fascinating study is that he is the the personification of how modern myths work. At the core of Slenderman, most of us know he is created. You can trace back his history to specific posts and websites. The internet ruins the myth but at the same time, the Internet gives it an authenticity and connectivity that continually builds upon it. To first understand the Slenderman myth lets look at how he was created. Know Your Meme chronicle :

On June 8th, 2009, a paranormal pictures photoshop contest was launched on the Something Awful (SA) Forums. The contest required participants to turn ordinary photographs into creepy-looking images through digital manipulation and then pass them on as authentic photographs on a number of paranormal forums.

"We didn't want to go, we didn't want to kill them, but its persistent silence and outstretched arms horrified and comforted us at the same time..." 1983, photographer unknown, presumed dead.

One of two recovered photographs from the Stirling City Library blaze. Notable for being taken the day which fourteen children vanished and for what is referred to as "The Slender Man". Deformities cited as film defects by officials. Fire at library occurred one week later. Actual photograph confiscated as evidence. 1986, photographer: Mary Thomas, missing since June 13th, 1986.

That is all we got. While you can see the seeds of what he has become there, the myth has now taken on an expanded myth that continues to grow. Wherever the Slenderman went on the internet, the story grew and grew. Now he has become a part of internet pop-culture. A tall man that lurks in the shadows with a blank face and dressed in a suit. The image itself is pretty creepy. However what makes Slenderman a frightful idea is he is a void for many fears. And what houses that void is the internet community. 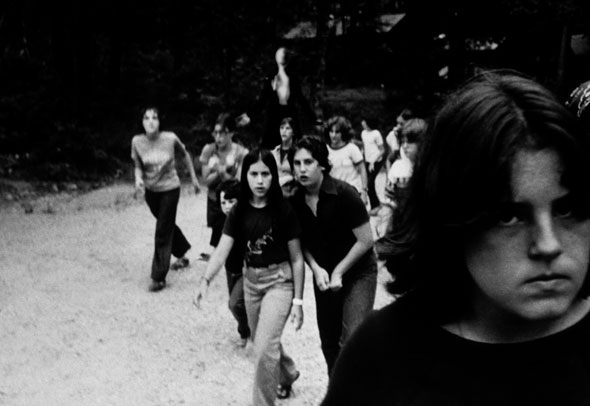 The Internet is always a confusing place to discern any sort of information. It's simultaneously great and problematic because it is a network of perspectives. If you read a book, you are getting a single voice so you take it in more readily. But when you are bombarded by several thousand opinions on one subject, all trying to convince you that their views are more meaningful than the last person, it can all get a little overwhelming. And that is even before we get to comment sections. Slenderman works because, like his character, you can''t get a good look at him. He is ambiguous. What does he actually look like? Sometimes he has tentacles coming form his back and sometimes it doesn't. Where does he come from? What are his motives? This imaginary figure already has power over us. We don't know what it wants from us because the internet confuses the situation. Does it want to skin our head and wear it as the face he never had or does he really just want that $20? Two stories will tell you different. By far the most interesting interpretation of Slenderman is the Marble Hornets series on youtube. In retrospect, I think it is an unknowing innovator. Troy Wagner and Joseph DeLage have crafted a project that has married two principles that work on the internet, The Slenderman and found footage. Found footage movies have been becoming a very strange monsters. They idea of 'fooling' an audience into thinking that a story is real has been around since the dawn of storytelling. Think of all the stories about dragons from England's past. The legend of St. George slaying a dragon was obviously a tall tale. The legend only became popularised in the 1100s, about 900 years after George's death in the book The Golden Legend The Enlightenment hadn't happened yet and there was a near century distance between the fact and the fiction. Why would anyone question the existence of a dragon? But today we are naturally skeptical. The key component of found footage is that on some level we have to think it is real. There is no other reason to shoot with these limiting constraints. However, as an audience we know if it's playing at our local multiplex, there is no way that it is real. No governing body would ever sign off to that.. Writers, producers and even audience members are looking for ways to recapture that authenticity. We may still find elements of the style scary, but not in the way it was originally intended for.

A quick survey, Do you think more people are convinced that the Paranormal Activity movies are real or that Marble Hornets is real? The answer is almost certainly Marble Hornets. Why? We are back again to the ambiguity of the internet. If Hollywood directors, actors and studios are involved, than all authenticity is severed. If an unknown user posts a video on the internet, we suddenly are thrown into the dark. We don't know where this video came from or anything about the creator. Despite us being naturally skeptical, we have nothing to disprove it at first. There is doubt. And where there is doubt, fear is never too far away. Marble Hornets is just deep enough to be believable and is thought out enough to sustain a mythos. The ambiguity of the platform, the ambiguity of the antagonist, the ambiguity of the style all come together to make an unnerving experience. It plays on the exact same fears as Slenderman and is built around the same network. The future of found footage has to be on the internet. It can of course stay in film but it's mechanics need to change. Perhaps going towards being used as a contextual statement rather than trying to make it feel 'real' may bear more fruit in the future. What is interesting is that the original creator Victor Surge has commented on this phenomenon and it really helps support the argument I am making here. In an interview with slenderman235's blog, he said

It was amazing to see people create their own little part of Slenderman in order to perpetuate his existance.I didnt expect it to move beyong the SA forums. And when it did, I found it interesting to watch as sort of an accelerated version of an urban legend. It differs from the prior concept of the urban legend in that it is on the Internet, and this both helps and harms the status of the Slender Man as one. In my personal opinion, an urban legend requires an audience ignorant of the origin of the legend. It needs unverifiable third and forth hand (or more) accounts to perpetuate the myth. On the Internet, anyone is privy to its origins as evidenced by the very public Somethingawful thread. But what is funny is that despite this, it still spread. Internet memes are finicky things and by making something at the right place and time it can swell into an Internet Urban Legend.

Slenderman is an example of how a myth becomes a myth. Myth are important to us and fundamental to our society. We always have to feel like there is something bigger than us, something unexplained. This is called "The Big Other'. It can manifest into religion, aliens, conspiracy theories, unexplained phenomenon and creatures. I could spend a couple more thousand words talking about the Big Other, so I will spare you by just posting this essay from Slavoj Zizek if you want some extra reading. (It is fascinating stuff). But something interesting is happening. The world we now live in has become 'explained'. Religion is on the fall, We have a thirst for knowledge, Corporations are proved to be corrupt everyday, Journalism is hell bent on the truth. If we want the answer to something we can find it on the internet or use the internet to investigate. The world we live in has much less room for as much mystery as there used to be. But as I explained, it is engrained into our mind-set. It's part of the individual psyche as modern humans. So what have we started doing? Being the complex creatures we are, we have started creating our own myths. We know Slenderman is fake. We know he isn't standing behind us now right now. But I bet after an episode of Marble Hornets or playing a game of Slender, you still double check. As scary as you might or might not find him, you what him to exist. We want our world to be a mystery and bigger than us. We need it to be. We need Slenderman.
Want to write about Slenderman? Get started below...
Contributor
Patrick Dane
Contributor
Twitter

10 Ways You Think About The Titanic All Wrong

9 Scientific Ways To Tell When Someone Is Lying

10 Amazing Life Hacks That Are Actually Backed By Science

7 People Who Claimed To Be Time Travelers