Nigel French/EMPICS SportNetherlands could be without Robin van Persie for tonight's semi-final World Cup clash against Argentina. The Manchester United striker is struggling with a stomach complaint. Midfielder Nigel de Jong could feature, however, after recovering from a groin strain that threatened to rule him out for the rest of the tournament. Argentina have injury woes of their own with Angel di Maria sidelined with a thigh injury. The winger may recover in time to feature in the final however should his country make it through to the last round. Striker Sergio Aguero is back in contention after recovering from a thigh injury of his own while defender Marcos Rojo is free for selection after serving a one-match suspension. (BBC)

Argentina's victory over the Netherlands in the 1978 final is the only time they have beaten the Dutch in eight meetings in all competitions (D3, L4). However, the two nations haven't met for eight years since a 0-0 draw at the 2006 World Cup. This is Argentina's first World Cup semi-final since 1990, when they went on to lose to Germany in the final. This is the Netherlands' third semi-final appearance in their last four World Cup finals. 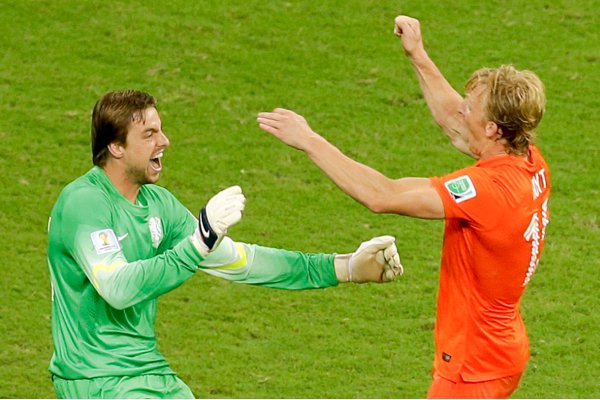 Themba Hadebe/AP/Press Association ImagesThe Netherlands' route to the World Cup semi-finals has been an extraordinary tale. On the brink of going out against Mexico in the last 16 and forced to penalties by Costa Rica in the quarters, there has been no shortage of talking points. Against the Costa Ricans, Dutch manager Louis van Gaal made the astonishing decision to replace first-choice goalkeeper Jasper Cillessen with Tim Krul seconds before extra-time petered out into a shootout, and boy did it pay off. Krul made two saves to help his country through, though will likely retake his seat on the bench tonight. It was just one of the latest bizarre chapters of Holland's World Cup run, which has taken in a barmy 5-1 win over World and European champions Spain. Their opponents here, Argentina, have had a far less notable run. Belgium coach Marc Wilmots dismissed them as "ordinary" after their quarter-final match ended in a slender 1-0 win for the South Americans, who, despite boasting the talents of Lionel Messi, Angel di Maria, Ezequiel Lavezi and Sergio Aguero, have been far from their attacking best at this tournament. Argentina have recorded three 1-0 wins at this World Cup - against Iran, Switzerland and Belgium, and have been far from convincing. Yet here they are at their first semi-final since 1990 with a real belief that this could finally be their year. In Messi, they have a player on a personal mission to win this competition, and re-establish himself as world's greatest player having lost his title to Portugal's Cristiano Ronaldo earlier this year. This semi-final has a lot to live up to following last night's unbelievable 7-1 showpiece, and whether it's Holland or Argentina joining Germany in the final, each will know the Germans could be the ones to beat at this World Cup. Prediction 0-1
WWE