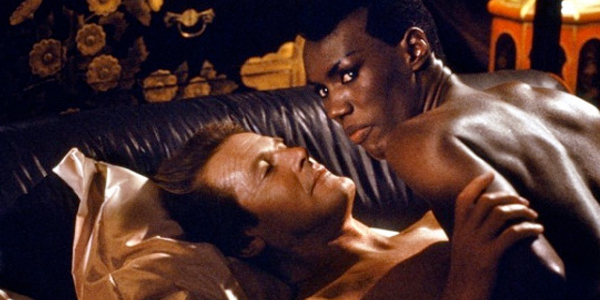 M was putting it mildly when she called 007 a 'sexist misogynist dinosaur'- he's not terribly keen on foreigners or homosexuals either. Watching the early Bond films can be an awkward experience because they're peppered with the sort of casual bigotry you might otherwise expect from a disgraced stand-up comedian or a senile aunt. As the series went on, the production team tried to shed this politically incorrect image- and in doing so blundered into even more awkwardness. If you're in the mood for a cringe, these are the ten best/worst examples:

What's more awkward than yelling at someone to fetch your shoes? Yelling at someone to fetch your shoes when that someone happens to be black, and you're the whitest guy in the world. Dr No is a great film because it establishes pretty much everything we still love about Bond. Bits of it seem creaky today, but it does a fairly good job of setting up the style and tone of the movies that followed. There's a sexy girl in a small bikini, an inscrutable, vaguely Asiatic villain, a car chase, some explosions and a significant allocation of one liners. It's politically incorrect, but that's part of the appeal- it's fun watching Bond shagging and hitting people at will, because none of us could get away with that in real life. Compare it to the moody Daniel Craig films and it all seems a bit of a lark. Everything except the infrequent bursts of casual racism. It should probably go without saying that 1962 was a very different time. The British Empire was in its death throes, and Jamaica would gain independence only a few months before Dr No was released. Still, old habits die hard, especially when they're born of an artificial sense of privilege. In the original novel, Bond's West Indian friend Quarrel played an important part in the narrative, prepping 007 for his infiltration of Dr No's headquarters. In the film, he plays an equally important, but considerably more demeaning, part. On arriving at the doctor's island base, Bond, not wanting to get sand in his socks, sensibly dispenses with his footwear. The next day, having hit a lull in his conversation with a semi-naked girl, Bond shoots a cursory glance at Quarrel and barks "fetch my shoes" at his long suffering associate. (around 2.20 in the video below); It's one of the most breath-taking moments of off-the-cuff bigotry ever committed to film, only made worse by Quarrel's obedient compliance. He runs off to collect said waterlogged slip-ons with nary a moment's hesitation or muttered swear word. This is sadly par for the course in a movie that never questions the racial hierarchy of Britain's Empire, even when it was slowly disintegrating. The only other black faces are barmen, waiters and extras- all of them servants in one way or another. Quite apart from the hilarious aristocratic prissiness of 007's command- coming only seconds after they've all just been shot at by a gunboat- the fact that Bond naturally expects a black man to do his bidding for him, without the hint of a please or thank-you, encapsulates in three seconds an ethos of oppression and subservience that lasted for hundreds of years. So yeah. In my head, I was like "did he just say that?"
Contributor
Allan Johnstone
Contributor
Twitter

10 Movie Mistakes You Can Never Unsee

10 Best Revenge Movies Of All Time

10 Horror Movies That Unbelievably Cut What We Wanted To See

10 More Upcoming Movies That Are In Big Trouble

Who Actually Killed Who In Scream?

20 Things You Somehow Missed In The Truman Show