The original blockbuster generation, not you scamps but those twice your age, are gearing up for JJ Abrams' old school sci-fi adventure and Steven Spielberg collaboration, Super 8, ahead of its release in the States today. For others, however, its the prospect of his forthcoming Star Trek sequel thats whetting appetites. Production is imminent and some of us are already polishing our communicators. Stand down, thats not a euphemism. We at Obsessed with Film make no apologies for our Star Trek fandom. Many of you will enjoy full social lives, better sex and a selection of outdoor interests, but were exploring the galaxy, wrestling with moral quandaries and patting ourselves on the back for possessing a liberal, tolerant outlook; its an optimistic view of the future that embraces all comers and looks forward to human kinds technological and social advances. We hate Klingons of course but lets not get into that. As the cameras get set to turn on the as yet untitled Star Trek sequel, OWF asks an important question. Who should the villains be? Dont yawn, this stuff matters! We cant all just dine with our girlfriends and discuss having a family yknow.

I. HAVE HAD. ENOUGH OFWho?

The dilemma for returning Trek scribes, Alex Kurtzman and Roberto Orci and the newly added Damon Lindelof has been who, or indeed what, should occupy the Enterprises elite in their second rebooted adventure? Trek at its most potent deals with issues, as well as common or garden villainy. Who can forget Darmok, that great parable about the importance of communication and understanding that marked the best of The Next Generation, or original series aliens, The Horta, (The Devil in the Dark)  those misunderstood subterranean monsters that man had so thoughtlessly disturbed? Star Trek 2, for want of a better working title, will be an event movie however, and fans may expect a strong protagonist for Kirk to fire his phaser at. The series now has an alternate timeline to play with and so everyones back in contentionexcept the Vulcans, theyre all space dust. Heres our run down of the top 5 candidates who may get a makeover.

I know what youre thinking, but anyone who believes that these corn munching furballs are just cute props, hasnt been burning the midnight oil reading their Star Trek Encyclopaedia. Tribbles are the elephants in the space quarters of federation affairs. Not only do they make handy mules for improvised explosives, a ruse that was used in an attempt on Captain Kirks life, but their incurable appetite and propensity to breed like bacteria, makes them an interplanetary menace of catastrophic proportions. The Klingon Empire, hitherto known for its restraint and lack of aggression, thought the matter so serious that they dispatched a fleet of warships to devastate the Tribble home world, pummelling it from orbit with bastard torpedoes. Might the furry fiends get their revenge and threaten to spark an interplanetary conflict? Its hard to see how without feet, hands, ships or weapons, but you cant write them off. They play the long game. Their war is fought in the mind. Essentially theyre a race of Space Columbos. Theyve already worked out what youre going to do before you have. Kirk Stress Factor: 8.2

The original Enterprise crew occasionally bumped into this portly, moustache twirling, smuggler whose misogyny was the stuff of 23rd century legend. A duplicitous shit who fought the battle of the sexes with scant regard for the accords signed in the 20th-22nd centuries, his existence represented the threat of regression to a time when wives were caricatured as nagging dunces, and women could be manipulated by appeals to their absurd vanity and materialism. By the 23rd century, sexual politics had advanced to the stage where Mudds classical outlook was considered dangerous and potentially destabilising to the moral fabric of the universe. Not a villain of Khanian proportions but possibly even more dangerous if youre concerned with the treatment of female crew members. Kirks attitude to the ladies is a little unreconstructed itself. Could a big screen encounter pit the Captains intellect against his loins in a battle for our heros soul? It might make for a better movie than you think. Kirk Stress Factor: 6.5

Little is known of these rarely seen original series aliens, who wrote themselves into the history books when they snared the Enterprise in one of their infamous webs  a latticed energy trap that fells Federation starships. Non-humanoid and therefore a headache for screenwriters who may wish to imbue their villains with relatable grievances and emotions, they nevertheless possess an enigmatic streak and a calculating zeal that would make them formidable foes for the crew, were they to get stuck. A possible collaborator for a humanoid villain perhaps? I should coco. Kirk Stress Factor: 8.1

Lets hope that K & O resist the temptation to resurrect Ricardo Montalbans genetically enhanced madman, because hes already been in a film called Star Trek 2 and its been cannibalised enough. Khans a magnificent beast, a scene chewing, megalomaniacal loon-a-tune with a thirst for conquest. Once he owned two thirds of the Earth, thats more than Queen Victoria at her peak, and had a fortune that made Bill Gates look like the first deposit into a childs building society account. Still, its hard to see how he could return without re-running Space Seed, as hed still be in cryogenic suspension, and floating aimlessly in deep space. A remake of an original series episode would be a bit of an anti-climax. Kirk Stress Factor: 3.6

Whereas a straight remake of an original series episode would be about as welcome as a Romulan Ale soaked Pool Party at Michael Barrymores house, theres plenty of potential in the crews immoral counterparts. First introduced in the original series episode Mirror Mirror and both sequelised and prequelised on television, Terran Empire set adventures allowed for all shades of brutality and immorality, and occasional relief from the series robust moral code. A movie crossover could be fantastic, pitting the Enterprise against her bearded and imperialist alternate selves. The best stories usually feature some form of inner-conflict, well heres a big screen solution that literalises the same and provides fun double roles for everyone. Hell, in the Mirror universe, Vulcan might even still exist. That would give Spock something to think about wouldnt it? Kirk Stress Factor: 9.5 And what about our old Next Gen friends?.

Next Gen non-humanoid lifeforms and isolationists, with a famous disdain for human kind. To them were little more than beasts with language skills. Theyre aggressive too. Plenty of scope for that magic one two of moral quandary and cool, space bound destruction.

Those one night only monsters that threatened to invade the 24th century but never followed through. They were intelligent parasites who used us as hosts; the enemy within. Might we see an earlier attempt at Federation colonisation? I dont know.

John De Lancies omnipotent taunter that continued the Tremaine legacy of God like super-villainy. Impossible to defeat in the classic sense, as he cant die and could remove you from existence with a click of the fingers, his presence instead, would act as a catalyst for a secondary quandary, possibly of intergalactic proportions. On television he was constrained by budgets but mega-machinations on the big screen might be just the ticket. He brought on the Borg, who else might he want to introduce us to? 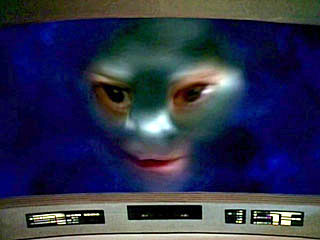 A sinister, space sadist with telekinetic powers and no body, who famously killed a disposable crew member because he was black, demanded Doctor Pulaski have sex with Picard in front of the bridge crew, the bastard, and gave the crew forewarning of their forthcoming executions. An absolute c**t and nightmare guest for any Starfleet crew, hed force Kirk to make some hard choices, like phaser or pills. And no chance for

Deep Space Nines evil federation are, alternate timeline or no, safely locked away in the Gamma Quadrant, and may not yet be formed, which is a pity, because they certainly knew how to start wars and murder billions in the name of an ultra-refined brand of space hate and fascism. Who would you like to see taking on Kirk and Spock in Star Trek 2? Tell us!
Want to write about J J Abrams, Star Trek Into Darkness and Star Trek? Get started below...
Contributor
Ed Whitfield

Ed, or Extreme Discernment, is experimental Film and Television critiquing software developed by and for What Culture. Invested with over 3 million digitised artefacts, spanning 80 years and including volumes of criticism from luminaries such as Paul Ross and TV’s Alex Zane, Ed generates the best reviews money can buy. Ed’s editor plug in also allows him to oversee The Ooh Tray, a magnificent film and literature review. Follow Ed’s digi-pronouncements on Twitter: @edwhitfield

10 More Movies Where The Reshoots Were Painfully Obvious

10 Movies That Forced Actors To Face Their Fears