In the playground of entertainment, it's easy to see Hollywood as the school bully; grabbing video games, cartoons and even board games by their heels and shaking them 'til all their money falls out. While we generally turn a blind eye to the board game bashing, it is the cartoons that we cherish the most. For wrapped inside their theme songs, catchphrases and collectable action figures is a still-beating sense of nostalgia. And no matter how many hundreds of millions of dollars Hollywood can throw into trying to recreate it, it is a commodity that ultimately proves priceless. Many an animation has stretched itself into a feature-length episode or TV special. Some have even enjoyed commercial success with spin-offs and cinema releases. But, as we'll see, nothing kills a cartoon quite like the words 'live-action adaptation'. Except, of course, the words 'live-action adaptation- in 3D'. Listed below are the films that you prayed would be immune to the cartoon curse. They are the films that forced you to swear in front of your children. To put it bluntly, these are the films that took a run-up and kicked your childhood in the balls. 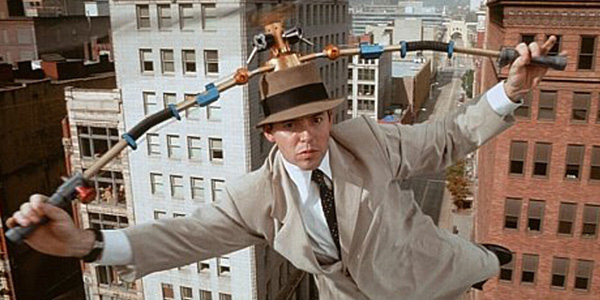 Like licking your elbow and sneezing with your eyes open, it's physically impossible to dislike Inspector Gadget. Who could resist a man with more hi-tech wizardry than Bond but less brute force than Frank Drebin ? Who would dare pit themselves against the crime-fighting duo of Penny, the Inspector's inquisitive niece, and her dog, Brain? Who else read that as 'dog brain?' Who else wondered why Chief Quimby never found a new way to deliver Gadget his messages? And, of course, just who the hell is Dr Claw; the gravel-voiced mystery antagonist with a catchphrase that surely even he's sick of hearing? You know what I just said about it being physically impossible to dislike Inspector Gadget? That only applied to the TV series. The film adaptation, however, is a different matter. Let's just put aside for now the slightly sacrilegious concept that not only is Dr Claw suddenly going under the name of Sandford Scolex, but that, as we're finally given a glimpse of his face, we're meant to believe he's as good-looking as Rupert Everett. Instead, let's concentrate on tracking down whoever thought Matthew Broderick would make a good Gadget. Or let's ask why the task of directing such a childhood dream was placed in the hands of David Kellogg; a man whose experience of filmmaking was limited to the genuinely so-bad-it's-good 1991 romance Cool As Ice, starring- yep- Vanilla Ice. Mercifully, the film only lasted 78 minutes; meaning that audiences had plenty of time left in the day to go go see something else.
Contributor
Dan Wakefield
Contributor
Twitter

The Single Biggest Mistake Each Fast & Furious Film Has Made

9 Horror Movie Villains We ALL Foolishly Thought Had WON