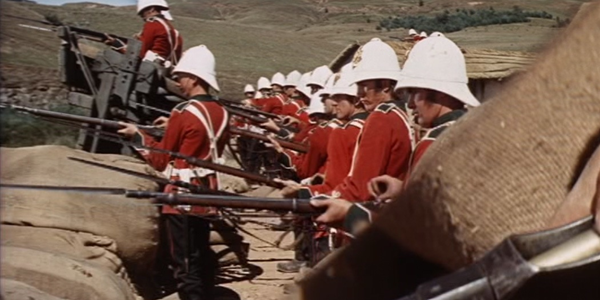 Paramount PicturesOnce you get past the comically strange juxtaposition of Michael Caine playing an upper class British officer, watching 1964s Zulu remains an unsettling experience to this day. As you hear the eerie beating sound compared to a train in the distance nearing the British missionary station of Rorke's Drift, you know things are about to get bad for the 150 men inside. Of course this is no train but rather the sound of a horde of Zulu impis looking to eradicate the colonising British from Zululand. Throughout the day and night wave after wave after wave of attackers attempt to breach the fortified missionary station only to be repelled back by the British soldiers with their rifles  ox hide shields are no match for the Enfield, it seems. Despite this mismatch in weaponry, the Zulu horde eventually succeeds in pushing the British back into an inner compound. In this compromising position, the Redcoats carry out one of the great battle strategies in all of cinema; forming three ranks where one rank fires while the other two begin the annoyingly time-consuming process of reloading their rifles. The British finally repel the last wave and the weakened native army falls back. The audience is just as shocked as the brave men of Rourkes Drift when their vanquished enemies sing a song to honour the bravery of the victorious force. A closing narration tells us that the Battle of Rourkes Drift is the most successful military defense ever in terms of how many Victoria Crosses were awarded (eleven)  this miraculous battle has been honoured with a fittingly incredible movie version.
Contributor
Sam Heard
Contributor
Twitter
Facebook

9 Times You Had To Be Tricked Into Seeing Great Movies

13 Movies So Awful You Walked Out Of The Cinema

10 Best Movies Where Everyone Dies