Make-up design truly is one of the under-appreciated arts of cinema. Without it, you have a bunch of people running around with shiny faces in Halloween costumes. And the fact of the matter is, there are so many movies that simply could not be made without a dedicated team of artists creating model after model, up to their elbows in facial prosthetics and spirit gum. You might notice on this list that I didn't include people like Lon Chaney or Boris Karloff. Blasphemy, you might say. While their films contain what is undeniably some of the best makeup work ever, they were far more well-known with their makeup on than without. We can all easily picture the Phantom or Frankenstein, but I doubt most people could describe what those two men actually looked like in real life. For this article, I wanted to focus on famous actors whose appearances were so dramatically altered that the end result is virtually unrecognizable. By the way, for future reference: 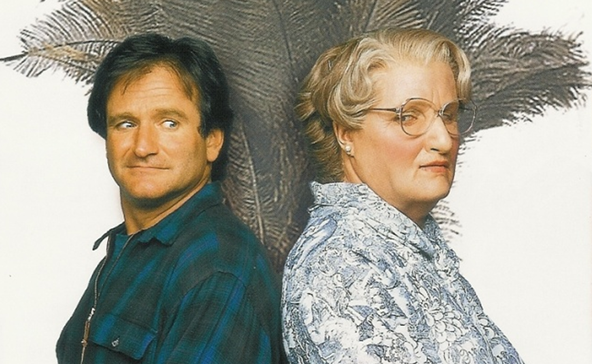 Being able to convincingly pass as a woman so that you can traumatize/sexually confuse your children is just one of the perks of having a make-up artist for a brother. When Robin Williams' wife wants a divorce and gains full custody of their three children, he decides that the only way for him to see his kids is to take pretty drastic measures. He poses as an elderly English nanny, who is quickly hired to watch his own children. Obviously that's the easiest solution to everyone's problems. But to be fair, he goes all out. Facial reconstruction mask, body suit, wig, and heavy makeup make him almost indistinguishable from a middle-aged woman. Robin Williams has even gone on record saying that during filming, he ventured out to a local adult bookstore to test out the costume, and completely went unnoticed. Well...as unnoticed as an elderly woman buying something at an adult bookshop can possibly be.
Contributor
Audrey Fox
Contributor
Twitter