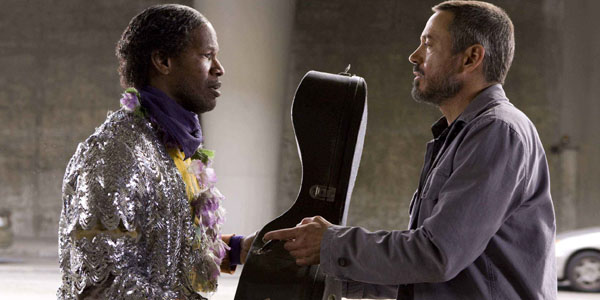 Steve Lopez is a journalist who has a bad motorbike crash and ends up in hospital. One day he hears beautiful violin music playing. Investigating, he finds out that the player of the violin is Nathaniel Ayers - a homeless schizophrenic who attended Juilliard for a while. Curious as to how such a prestigious student could have ended up this way, Lopez believes this is a good story and track's down Nathaniel's family. His sister says that he was a child prodigy where music was concerned and then he had to drop out because he developed mental illness and ended up on the street as a result. Lopez publishes the story and a kind reader gives a cello to Ayers which he can play as brilliantly as the violin. However Ayer's wandering puts him and his instruments in danger. Lopez tries to get him to leave the instruments in a homeless shelter to keep them safe. He also tries to get Ayer's to see a doctor, but Ayers is not interested. Music lesson with a friend go well but Ayers is increasingly dependent on Lopez who is trying to chuck him in an apartment. The article is so famous, Ayers is given his own recital but he goes nuts on the night and it doesn't pass. This convinces the doctor to help Ayers but when Ayer's finds out about this, he throws Lopez out of his appartment and threatens to kill him. But once the two characters realise how much they have changed each other for the better, they are reconciled. Robert Downey Junior and Jamie Foxx are excellent as Steve Lopez and Nathaniel Ayers respectively. The film packs a mean punch when it comes to the portrayal of schizophrenia - there are not always sunshine, lollipops and rainbows at the cessation of the disease - most people with the illness like Ayers suffer chronically for the rest of their lives after diagnosis. The film also asks an interesting question - should the mentally ill be forcibly medicated? This is a very pertinent question however, each person reacts differently to each treatment and sometimes, the cure is more distressing than the symptoms of schizophrenia.

12 Friends Actors Who Have Died