In light of the continuation of James Bond series, Skyfall, set to be released at the end of the month everyone will soon be reminded why film fans love the spy genre: the intrigue, mystery and slick nature of the genre - we cannot get enough of it. Previously fueled by cold-war tensions, the spy movies of decades past were often bleak and grim reminders of things that may or may not be actually going on in the higher offices of governments around the world. From the breezy but suspenseful North by Northwest and the Bond films of the 60's, to the hard-hitting stark cloak and dagger films of the 70's (Three Days of the Condor, The Day of the Jackal), the Cold War provided many a story-line for the espionage thrillers. However, with the fall of the Soviet Union the spy genre took a hit with audiences that would no longer feel the tension of real-world dangers from East vs. West. With the Iron Curtain lifted, the covert-thriller film-makers needed to come-up with new concepts to play around with. So, I'll define the term "modern spy flick" as being made after 1990, dealing with a government's personnel on clandestine operations and not relying entirely on the conflict of the Reds vs. NATO. (Sorry Tinker Tailor Solider Spy, but then you wouldn't have made this list anyway). The following ten movies show how film-makers adapted to changing times, attitudes and movie-going audiences in general, and their successes prove that movies no matter the genre films can be signs of their times. 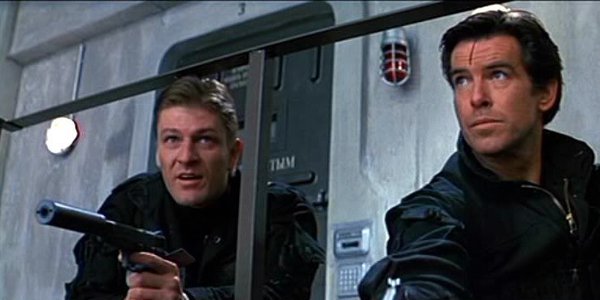 Wait, there was a movie made from the videogame? Yes, indeed there was a cinematic Bond outing to go along with the ground-breaking first-person shooter. After the receiving less-than steller returns for Timothy Dalton's Bond films (a real shame in my book, as he was the archetype for Daniel Craig's Bond) EON productions was caught in litigation over the series for over 6 years. It would take a something new and inventive to reignite the franchise, stagnant after years of Roger Moore and overly comical scripts. Enter Pierce Brosnan bringing some much needed poise and intelligence to the role, missing since the days of Connery, in this tight and taught spy vs. spy thriller in which his Bond must do battle with a rogue agent bent on collapse of the western world. The explicit allegory of the Cold War has never been so much of a conspicuous element in Bond, save for a few outings, and in fact the entity of SPECTRE was created early on to serve as the main organization of evil-doing instead of stirring up the East vs. West rivalries. More often than not East and West would team-up together against a common threat as in The Spy Who Loved Me, but Goldeneye capitalises on the fall of the Soviet Union and the subsequent power vacuums created. Needless to say, this is the Bond film that put the series back on track... until Day Another Day pulled the wheels off again, that is. It is unfortunate that Brosnan was never given the material after Goldeneye that could match it: it remains his best outing as the super secret-agent, and showed Bond would continue even after Cold War tensions died down.
Contributor
Jeffrey Stewart