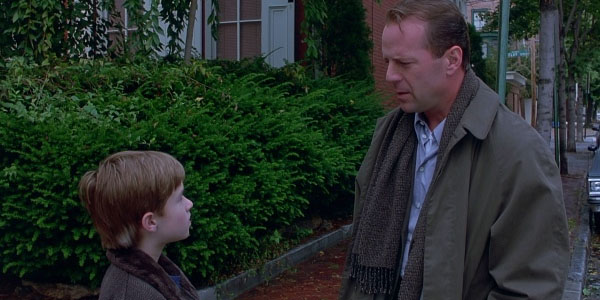 The debut movie from the writer of Stuart Little was a huge hit back in 1999, and made M. Night Shyamalan one of the hottest properties in Hollywood. Little did we know at the time that he only had a couple of good movies left in him (depending on your opinion of Signs; personally, I think it's an underrated flick) and less than fifteen years later his name was virtually omitted from all of the marketing materials for After Earth. Which actually turned out to be a good thing for anybody that had the mispleasure of watching po-faced little bugger Jaden Smith lose an acting battle against poorly-realised CG critters. The script was purchased on spec for a cool $2 million by Disney, also allowing Shyamalan to direct. However, the Mouse House soon lost confidence in the project and sold off the distribution rights, keeping only a 12.5% investment in the product. Somebody probably got fired for that as The Sixth Sense held the number one spot at the U.S box office for five consecutive weeks and went on to be nominated for six Academy Awards. It saw the phrase 'I see dead people' enter the public lexicon and become swiftly battered into submission, saw Shyamalan lauded as 'the new Spielberg' (hindsight is a wonderful thing) and briefly made a star of Haley Joel Osment. If the film had been released these days, the famous twist would have most likely been ruined by the internet (SPOILER: Bruce Willis is dead all along, but you already knew that) and it spoke volumes about the quality of the movie that everybody didn't blab to their friends the minute they left the theatre. Viewed today it still holds up as an expertly written and efficiently directed thriller, and despite the alarming trajectory M. Night Shyamalan's career has taken since it remains one hell of a filmmaking debut, especially when you consider the writer/director hadn't even hit 30 when it was released.