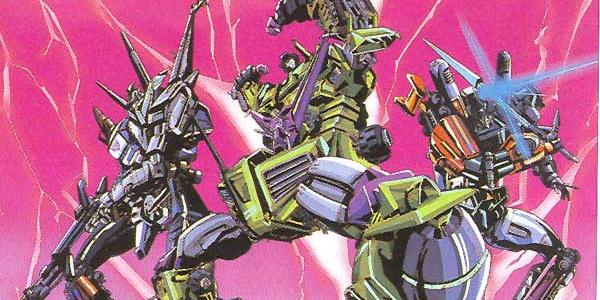 Hasbro/TakaraMaybe were too hard on Michael Bay. In terms of narrative and character development, his Transformers films are diabolical. But in terms of purely visual entertainment, the live-action Transformers films are a wonder to behold. Weve been offered tantalizing glimpses as to how large a character Bays willing to include in these films, but with varied results. The Jetfire/Optimus Prime combination from Revenge of the Fallen was rather spectacular (for all its brief onscreen time), while Devastator looked as if someone had squashed him into a puny pulp. Now that were four films in, perhaps its time for the Transformers to expand on their war. Wouldnt it be lovely if the Autobots/Decepticons left Earth for once and buggered off to other worlds, adding to the possibility of new, more varied characters becoming involved in the epic struggle between good and evil? But that would mean missing out on the next Megan Fox bending over a car bonnet or the next Mark Wahlberg all greased up in a tight white shirt, so thats one dream down the drain. Given that a fifth Transformers film is already in the talking stage, the Transformers universe populates a huge array of characters that havent been used yet, some of whom are genuinely huge. So lets take a look at ten of the biggest Autobots/Decepticons that Bay would be wise to include in any future Transformers film.
Contributor
Fred McNamara
Contributor
Twitter
Facebook

Senior editor for the superhero/comic book hub A Place To Hang Your Cape. BA in Creative Writing and Film Studies from Hull Uni. Currently getting lost in the big wide world of freelance writing. And some other stuff.

10 Movie Performances Even MORE Impressive When You Know The Truth

10 Horror Movie Victims Who Were Actually The Villain

15 Actors Who Were FIRED From Movies During Production

The Lord Of The Rings: 10 Most Powerful Items In Middle Earth

10 Movies That Had MASSIVE Tomatometer Drops