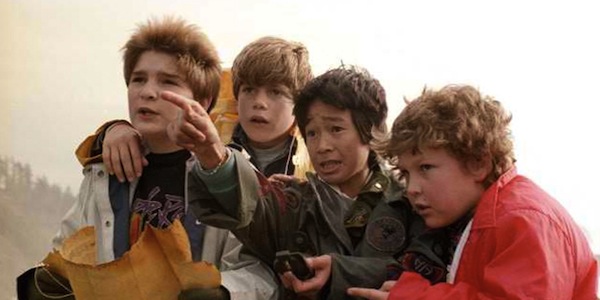 The 80s were a glorious time of trickle-down economics, neon windbreakers, and acres of cocaine. Perhaps in growing response to cultural fears regarding "latchkey kids," movie kids (and teens) in the 80s were running amok. Adventures in Babysitting, Ferris Bueller's Day Off, Gremlins, Risky Business, E.T., and other hits (or near-hits) worked on the premise that adults were either idiots, the bad guys, or totally absentee. Any one of those movies would qualify as having pretty badass kids. In fact, you could easily write this list using nothing but 80s kids' adventure movies. That would be pretty dull reading, though, so I'm limiting myself to The Goonies as the archetypical stand-in for all of them. If you disagree with this assessment, feel free to just insert your own preferred 80s kids' adventure movie into this slot. It'll probably work. The Goonies, though, are pretty stone cold. In one fell swoop, they win against douchebag members of the 1%, hardened criminals, and a dead-but-fearsome pirate. That's like three movies' worth of bad guys, all in a day's work. In the face of all this peril, the audience knows the kids will survive and good will triumph over evil because that's what we've come to expect from this particular genre. That's a given. But within the universe of the story, the outcome isn't so assured. When the Goonies find the skeleton of Chester Copperpot, of course it's a convenient plot device to heighten the drama, but stop and think about it within the context of the world: the last person who tried to do what they were doing died. Sure, some of them panic and want to go back, but special props go out to Mikey "Samwise" Walsh for his undaunted courage and inspiring speeches. Onward they all pressed, where you and I would be shitting our pants.
Contributor
Katherine Koba