Although there were some very obvious references in and nice little additions to Thor: The Dark World (such as Loki changing his appearance to that of Captain America's and Stan Lee's usual cameo), there were also some more subtle occurrences in scenes that referred to events and beings in the famous Marvel comic books. As the movie progressed, the keen-eyed amongst us were treated to a series of references in the form of both words and pictures that either hinted at future events or simply gave a nod to classic comic book moments. In this article, we'll be taking a look at a few of them. Here are ten neat little Easter eggs from Thor: The Dark World (again, there will be spoilers ahead, so if you haven't seen the movie and intend to do so without knowing happened, do not read on)... 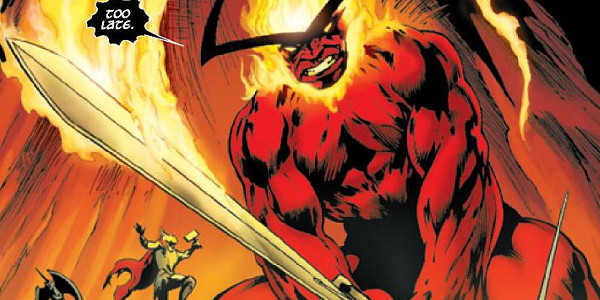 During the film's final scenes in London, the nine realms began to converge and the audience get a glimpse through a number of circular portals in to several of them - one of which appears to be Muspelheim, the realm of fire. Inside the fire realm, amidst the backdrop of solid flames, there is a distinctive shape moving around - that shape would appear to be Surtur. Surtur is the fire demon who attempts to bring upon Ragnarök - the Norse version of the apocalypse and a being so powerful that, in the comics, he is capable of rivalling Odin and is far too powerful for Thor to defeat alone. It is no surprise, therefore, that Surtur and the Ragnarök arc is one of the stories widely believed to be a strong contender for Thor 3 (and he's a villain that I've been championing for some time in previous articles, so I am very excited about this potential movie arc).
Contributor
K.J. Stewart
Contributor
Twitter

10 Actors Who Thought They Were Absolutely Sh*t At Acting

20 Films To Watch If You Love Halloween But Hate Horror