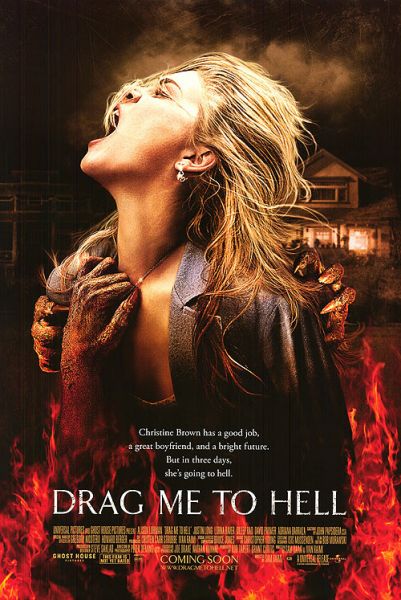 Sam Raimi's low budget throwback to his 80s' horror days was clearly a deal from the day someone said "Let's call this film Drag Me To Hell", because, really, it does exactly what that title proposes. Or does it?

Depending on how you consider those four words, it might be an invitation or a sarcastic retort... there's linguistic license to be taken. But then the poster came out and then all bets were off. A huge image in its centre depicts the cursed mortgage officer Christine (Alison Lohmann) being clawed at by unseen hellish demons and being, well, dragged to hell.

If for some reason this spectacle was at all unclear, the tagline clarified what was in fact the film's entire ending: Christine Brown has a good job, a great boyfriend and a bright future. But in three days, shes going to hell. Where's the secrecy there? Where's the suspense?