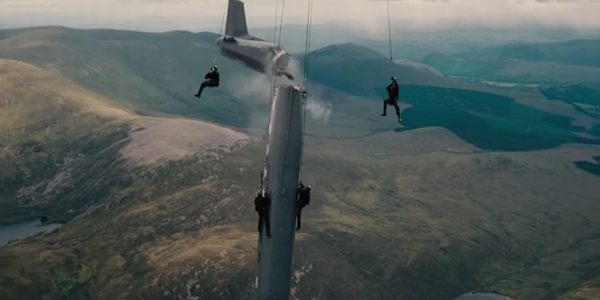 And onto our final entry for Christopher Nolan. The beginning scene of The Dark Knight Rises. In this sequence, we see Bane captive aboard a government plane when some henchmen rappel down from another plane higher up. They proceed to kill nearly everyone on board, rescue the survivors, then wreck the whole plane to make it look like an accident. https://www.youtube.com/watch?v=jtOO82jDQiY They could've done the scene pretty easily and effectively with miniatures. But of course, Christopher Nolan thought it would've been so much cooler to just buy and wreck a real plane. While all the scenes inside the plane (such as Bane taunting his captors) were filmed on a set, the outside action was done extremely brave stuntmen and a few million spare dollars in the film's gigantic budget.

In fact, after filming it once, Nolan announced to everyone "Looks good! Let's do it again!"

That's right. They destroyed two planes in that scene. And got people who weren't afraid to do this insane stunt twice!

For our final Bond movie entry, we feature the most controversial one ever made - Licence To Kill. While people are still torn over their opinions of this movie, there's no denying it has the most heart-pounding stunts ever committed to film in the franchise. The climactic battle takes place on a desert road with four tanker trucks with a cocaine/petrol mixture (long story). One by one, Bond overtakes and destroys the tankers, but there's two particularly intense and impressive moments. First as Bond approaches the villains in one of the tankers, they ready a bazooka and fire, but Bond is able to tilt the truck onto the wheels on the left side, and the projectile passes underneath. While the production crew was ready to rig up a device to allow this eighteen-wheeler to tilt on its side, the stunt driver was able to do it without any trickery. https://www.youtube.com/watch?v=2tx-vaF8aBI The second amazing stunt was when it was necessary for another of these trucks to do a wheelie....

.... with nothing but improved suspension for the back wheels.

Every MCU One-Shot Ranked From Worst To Best New

10 Random Films That Are REALLY Popular In Certain Countries

How Every Robin Can Appear In The Batman 2