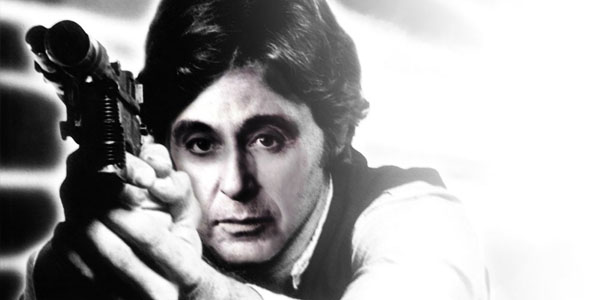 Whilst writing this, I'm starting to wonder where Harrison Ford's career would be now, should Al Pacino and Tom Selleck have accepted his most famed roles of Han Solo and Indiana Jones. Probably nowhere. They have been the defining roles of Ford's career and without them in his armory, his film resumé looks rather mediocre. From Al Pacino's point of view (who has a far more prestigious filmography than Ford) turning down the role of Han Solo in Lucas' original Star Wars series hasn't exactly encumbered his career. However Han Solo is widely considered to be one of the greatest film protagonists in cinema history and even the great Al Pacino you'd think would relish the opportunity to stamp his own unique interpretation on such a legendary character. Nevertheless, Pacino was repelled by the substantial fantasy component of the script, so he turned down George Lucas and instead opted to appear in the Sydney Pollack biopic, Bobby Deerfield, which has actually gone on to be one of his lesser known films. So whether or not Pacino has gone onto regret refusing involvement in one of the greatest ever film franchises, remains to be seen, but what is certain, is that Harrison Ford essentially has Al Pacino to thank for the commercial success of his career.
Offbeat

Ups & Downs From Doctor Who 12.5 - Fugitive Of The Judoon

8 Filmmakers Who RUINED Their Movies By Explaining Them

10 Actors Who Were Paid Almost Nothing For Great Roles