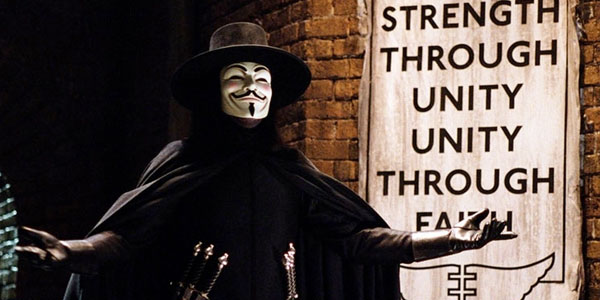 Exciting, stylish, theatrical, and challenging, V for Vendetta is one of the bolder recent sci-fi films, touching on issues largely ignored by movies with similarly sized budgets, and it does so with a deft touch and creative filmmaking. In the near future, civil war rages in the U.S and much of the rest of the world is overrun by disease, poverty, and war. The United Kingdom remains relatively stable, but only because of the dictator-like High Chancellor Sutler, who rules the country with an iron fist. Evey Hammond, a low level worker at a television station, becomes an unwilling freedom fighter when she runs into V, a charismatic terrorist whose dark past has forged him into a perfect weapon against the state. V for Vendetta benefits most from an outstanding performance by Hugo Weaving, who creates one of the most memorable modern movie characters, and an ambitious narrative that touches on homophobia, totalitarianism, and religion. The craft of the film doesn't always live up to its ambition but it remains a very well made, if inconsistent piece of entertainment.
Contributor
Paul Sorrells

10 Actors You Wrongly Think Are In Movies

10 Movies That Are Actually Good Besides The Marketing Gimmick