For decades now The Great Gatsby has widely been considered one of those unfilmable novels one always hears about whenever a classic or contemporary great of literature is about to be turned into a film  and it flops. Considering Baz Lurhmanns new version starring Leonardo DiCaprio and a host of accomplished actors has raked in over $96 million in less than 2 weeks (but done so with the aid of higher ticket prices for 3-D showings and an MTV-style look and soundtrack greatly amplifying its take in the tween and teen demographic), Im not sure whether the film is still considered unfilmable or not. Whatever its final box office take is though, theres no question the film (and with apologies to every English teacher in America) and the novel it draws from suffer from serious flaws thatll rightly keep it from ever achieving unequivocal cinematic blockbuster status with a modern day audience. One of the things a modern day audience has come to expect from its protagonists, whatever the genre, is for him or her to be, absolutely proactive. He/she may start the film as a loser but at a certain point its expected that the protagonist will find him/herself at least trying to do something about it by the storys end, even if its only coming to terms with who they are. While Jay Gatsby himself demonstrates a great deal of agency, the story asks us to also identify heavily with its narrator, Nick Carraway (played in the film by Tobey Maguire), even though he is really never anything more than a pawn in Gatsbys plans to win back the woman he loves, Daisy Buchanan (Carey Mulligan). The film tries to give him his own story arc by interspersing Nicks attempt to work through his nervous breakdown through his writing, but it doesnt change the fact that we are constantly watching Nick play a supporting role in someone elses tale. At one point in the story there are hints of possible romance blooming between Nick and Daisys ever-present BFF, Jordan Baker, but that goes nowhere. In the end, one has to wonder why Fitzgerald didnt go with an omniscient third-person narrator and why Nick is necessary to narrate the story at all. 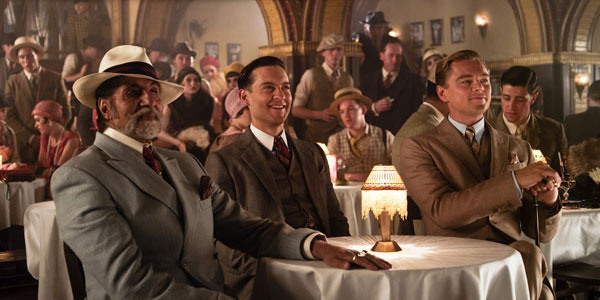 The answer to that is the film and the novels second big problem: the character of Gatsby himself works only as a metaphor. While this is no doubt a big reason why the novel is so beloved by English teachers everywhere, as a living, breathing character with some degree of plausibility, theres no there there. Other than aspiring to achieve the American Dream (i.e. become really really rich) and gain the acceptance of the 1% (in the form of Daisys hand in marriage) Gatsby has no discernible interest in anything else whatsoever. While many argue that Gatsbys one of the great romantic characters or a tragic hero Im not sure whats so romantic or heroic about a character whose only motivation is spending five years building up an estate seductive enough to woo the 1920s equivalent of Paris Hilton. The story might be more suitable for a throwaway Harlequin romance if the object of his affections were more worthy. Which brings us to the storys biggest problem: why should a modern audience care about any of the three main characters? Gatsby is never more than a metaphorical cipher; Daisys a capricious flake whose personality doesnt seem likely to engender more than a one-night stand, never mind a five-year obsession; and though Nick is the most grounded and plenty likable his allegiance to the manipulative Gatsby over the likes of good-time Daisy and her equally fair-weather husband Tom make his affections seems as misguided as Gatsbys. If Daisy and her ilk sicken him so for being integrity-free and perfectly okay with using others for their own superficial needs and amusements, why does he admire Gatsby for his unflagging hope that he will be accepted by one of those very same people? Its one thing for characters to be unlikable but its quite another to ask the audience to sympathize with a one-dimensional character whose only raison detre is to win the heart of one of those characters. If nothing else, one has to admire Fitzgeralds skill with words that he seems to have, on some level, accomplished exactly that given the novels canonical regard. However, for me, the story, whatever the movies financial returns are, remains unfilmable.

10 Actors Who Made Real-Life Changes AFTER Movie Roles