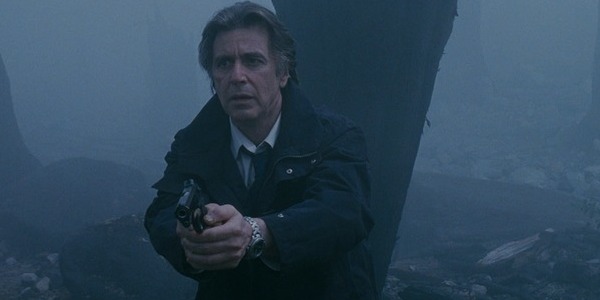 The world is cruel, and the only morality in a cruel worldis chance. Every single one of Nolans films is populated with morally grey characters, ranging from the protagonist all the way to the supporting characters. All of Nolans protagonists are people who the audience can identify with on a human level but also take some pretty appalling actions. In Memento, Leonard starts out as an extremely sympathetic character, but by the end, when he willingly decides to live a lie for the sake of purpose, you find yourself questioning whether you can root for such a man. On the surface such a decision may not seem so questionable compared to overt acts of human cruelty, but on an existential level it is completely abhorrent. Not only has he chosen to lie to himself, but in doing so he has completely disregarded the lives of those who get in his way. It is a very nihilistic and disheartening ending, and Memento is all the more brilliant for it. In Insomnia, Will Dormer is a homicide detective with a history of morally questionable actions. He justifies them of course, telling himself that they are for the greater good. In a great scene towards the end of the film, Dormer confides in the hotel owner of how he fabricated evidence to convict a pedophile he knew was guilty. While we know that such an action is wrong, we cant help but recognize its purpose. After accidently murdering his partner, Dormer actually fakes evidence again in order to make it look like the killer shot him. Unlike with the past pedophile case, we know he is wrong for lying, but we continue to identify with his plight, and even take pity on him as the lack of sleep continues to eat away at his mind. The Prestige gives us Borden and Angier, two magicians who have genuine passion for magic and theatricality. But after they go their separate ways, they continually try to one up each other, and in doing so hurt the ones they love most. Bordrens unwavering commitment to his act eventually leads to his wifes suicide, while Angier is willing to kill clones of himself just for the act. Angiers quest for revenge against Borden ultimately ruins both their lives. Yet despite these actions, the emotions behind them are instantly recognizable, and we connect with them, making their actions all the more chilling. Inception gives us one of Nolans most morally grey characters in Dom Cobb. This is a man who enters peoples dreams and steals their thoughts; a hired thief of the mind. He is used for corporate espionage and sabotage. Perhaps even more morally questionable is the act of inception at the center of the film. Cobb hires a cast of likable characters to implant a fabricated idea into an unsuspecting mans mind. Such an act is morally bankrupt, regardless of the nature of the idea itself. In planting the idea in Fischers head, they are influencing a future decision of his, thus partially robbing him of freedom and identity, two concepts every individual holds dear. Yet despite this, we root for Cobb and his team for the entirety of the film, and like any good heist film, the tension rests on their success or failure. Specifically we root for Cobb due to his very human quest of getting back to his kids. We like his character, we identify with his guilt and his love of his children, and thus we want him to succeed in the inception. All the while, we have that little voice in the back of our mind that knows we shouldnt. It is compelling drama, and it gives the audience something to think about beyond the amazing action scenes. Youd think that Nolans Batman films would have the least morally grey cast out of all of his films, but youd be wrong. Part of what makes his take on Batman so enthralling is how he grounds all the characters in reality. While characters such as Batman, Two-Face, Joker, Catwoman, and Bane may be comic book characters wearing goofy masks, Nolan treats them as people first. Bruce may be a crusader of justice, but he does things that are morally questionable. The Dark Knight brings this to the forefront, pitting Batman against an enemy that forces him to confront his own rules. He beats the Joker for information, wire taps an entire city, and orchestrates a city-wide lie at the end of the film. The same goes for the villains. With the exception of the Joker and Scarecrow, all the villains have a code that we identify with on some level. Ras Al Ghul may wish to commit genocide, but his reasons are completely understandable. Harvey Dent is a good person corrupted by pure evil, making for what is perhaps the trilogys most tragic story. Catwoman is the definition of grey, operating on a code that belongs solely to her. Even Bane is given some depth when we find out that he is a protector. If there is one thing that Nolans films have demonstrated, it is that he is interested not in cookie cutter good and bad guys, but people of differing moral foundations. Specifically, he is interested in how they compare and contrast with each other. He recognizes that no one is completely black and white, and that grey is the most intriguing color of them all.
Contributor
Brandon Jacobs
Contributor
Twitter