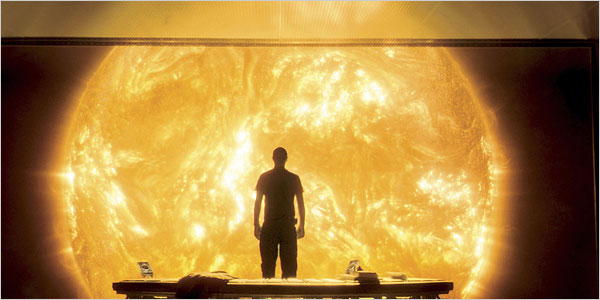 Very rarely do I come across a science fiction film that actually does something outside the norm and presents itself with something entirely new and original. Danny Boyle's 2007 classic "Sunshine" is a fine example of one of those films, succeeding by taking a simple doomsday idea and molding it into a conformity of different ideas and shrouded in moral complexities. For such a simple yet vastly in-depth film, it provides a number of profound and awesome ideas that help the film become one of the better science fiction works to grace the imaginations of audiences everywhere. These profound and awesome scenarios help flesh out "Sunshine" so as to provide as much excitement and intensity as humanly possible in a film which revolves around a team of engineers, scientists, and doctors traveling to our dying sun to reignite it with a nuclear payload that will help create a new sun in the image of the older, dying one. Simple yet familiar, right? You'd be surprised. And surprises come aplenty, I assure you. Out of all the great ideas that were poured into this film, I've narrowed the selection down to five distinct and clever reasons why it stands on its own two feet in the science fiction genre. For those that have seen the film and know of the film's ideas and twists, these may come as no surprise. I'm sure some people weren't as crazy about them as I was, but in a film that is based off a very simple design it sure does accomplish a lot and succeeds at capturing our attention. For those that have not yet witnessed "Sunshine", there are MASSIVE SPOILERS ahead, so I advise leaving this article if you haven't experienced the film for yourself yet.
Contributor
Ryan N. Glenn
Contributor
Twitter
Facebook