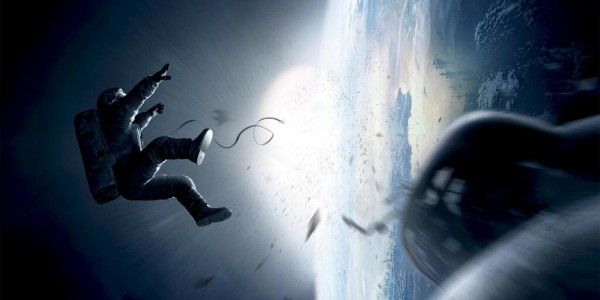 For the past 3 weeks, the space thriller survival film Gravity (written and directed by Alfonso Cuaron) has been the #1 movie in the States and around the world. The film's performance has surprised many critics and even the audiences who have found themselves enthralled by it, and it has set new records for a film released in October (typically considered a weak time of year for movie attendance). It is also the only movie since Avatar that deserves the extra money you will spend on 3D glasses. And you will see it in 3D (preferably in IMAX as well). Because no other film comes close to capturing that surreal feeling of floating above the Earth, what shuttle astronaut Jeff Hoffman has described as "the cosmic perspective." Of course, in Gravity that euphoria quickly turns into terror as disaster strikes and Bullock's character goes spinning off into the void with Clooney coming to the rescue in his Manned Manoeuvring Unit (MMU). Clooney, along with another astronaut played by Paul Sharma, spends most of the early moments of the film goofing around while Bullock works hard to install some new equipment on the Hubble Space Telescope. Clooney relates amusing anecdotes to the boys in Mission Control while cruising around in his MMU, using its jets of nitrogen to guide his movements, and generally exuding cool. A warning comes through that the Russians have shot down one of their own satellites, and due to a miscalculation, have created a possibly hazardous scattering of debris. Before Clooney, Bullock, and Sharma can return to the space shuttle, the satellite debris has impacted other satellites, causing a chain reaction and resulting in a monstrous wave of debris that is, of course, heading straight for our stalwart protagonists. Shortly after, the shuttle and the Hubble are being shredded and Bullock is tumbling into an endless starry backdrop. As a long-time NASA fan and science buff, I myself was extremely eager to see Gravity. It appeared that it could be that rare sci-fi film which deals with space in a completely realistic manner. In fact, I can think of only one other movie faithful to the realities of what a true-to-life space program would be like, Stanley Kubrick's epic 2001: A Space Odyssey (well, at least the first three-fourths of the film, before the Space Baby starts eating people's brains or whatever the heck is happening in 2001's psychedelic climax). Unfortunately, despite the fantastic 3D immersion of Gravity, despite the glorious cinematography and effects, despite wanting to weep whenever the astronauts glided above that big blue marble we call home, I very soon found myself thinking "Wait... that just doesn't make any..." and "What? Really? Are you kidding me?" followed by a few mutterings of "Well, it is just a movie..." and overall punctuated by a chorus of "Good God! Sandra Bullock, can you please stop hyperventilating?" Don't get me wrong: I thoroughly enjoyed Gravity. But some of the artistic license the filmmakers took with the science of outer space (and even of gravity itself!) did diminish my appreciation of the film. And as many astronauts along with sci-celebrity Neil Degrasse Tyson have done, I couldn't help but make note of a few of the most glaring scientific inaccuracies.
Contributor
John Wesley Dickson
Contributor
Twitter
Facebook

Used to be a prophet, still sometimes a poet, mostly writes and teaches, plays video games, and eats noodles. His website, Tanasttia.com, features a variety of articles, from personal memoirs and observations to World of Warcraft blogging, from the mysteries of Bigfoot to the quality Media Analysis that WhatCulture readers have come to expect. Follow on Twitter @aquagorillabear