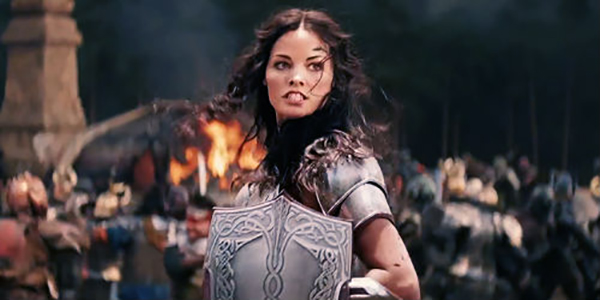 Based on the title of the film, you'll see in a minute why this accident is slightly ironic. The beautiful and fearless Jaimie Alexander risked disfiguring herself permanently when filming the new Thor film this year. The 29-year old actress took a mighty fall when slipping off a metal staircase during a rain-beaten set. While you'd expect many of these accidents to happen while attempting a stunt of some kind, it comes as a shock to see the actress sustaining this injury off-film and while merely walking on a staircase. 'It was raining, it was dark outside, it was like five in the morning  and I went down a metal staircase and slipped. It took me out of filming for a month' - Jaimie said in an interview with the New York Post. Dark World, dark outside... see what was meant? Never mind. As a result of the fall, the actress sustained multiple injuries and was lucky she didn't do herself any permanent damage. Jaimie slipped a disc in her spine, chipped 11 of her vertebrae, and dislocated her left shoulder - while also tearing a rhomboid on her left side. A shopping list of horrific injuries for the poor woman, but she recovered and is now back to her usual self thankfully. It could have been much, much worse for the actress, but shows how the simplest task of walking down metal stairs, albeit wet ones, can almost be fatal. Health and safety may well be the name of the next Thor film. As expected, her loyal fans were devastated to hear the news as it broke, and sent many messages of well-wishes via social networking sites. She tweeted details of her recovery process on a day-by-day basis, and finally ended with 'I'm walking in heels again. That's a good sign'. Marvellous.

Crippy Cooke, 23, is a freelance Football Writer contributing to What Culture. He's had work featured on Zoo, MSN, London 24, The Telegraph, The Huffington Post, and was recently named Writer of the Year on FTBpro - while also a nominee for Best Male Blog in the Football Blogging Awards.

10 TV Shows That Redeemed Hated Characters In A Single Episode