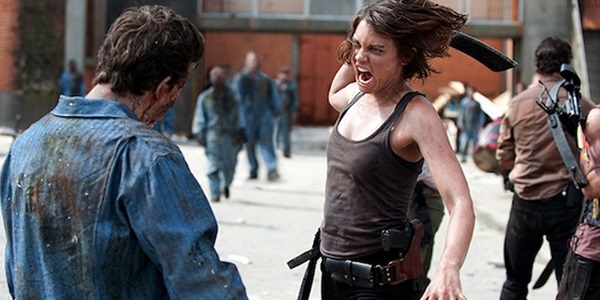 Although she started out life in Philadelphia, born and raised, on the playground... I'll stop - Cohen moved to Britain in her teens, and still speaks with quite a posh British accent in every interview she does. But you'd think her role in The Walking Dead - as farming-girl-turned-bad-ass Maggie Greene -would come quite easily, having lived in America, and having presumably seen and heard the Alabama accent from time to time? Well, apparently not. Unlike her fellow British co-stars Andrew Lincoln (Rick Grimes) and David Morrissey (The Governor), who have picked up the accent remarkably well, Cohen seems to fluctuate all over the place and she performs with a stereotypical and nauseating drawl, which makes me wish a Walker would just hurry the hell up and take a large chunk out of her neck to silence her. Perhaps the stresses of the zombie apocalypse are to blame, bamboozling her vocal chords?

Steven feels like a sociopath writing a bio about himself in third person, but it feels kind of nice, and he's sure he'll get used to it.

10 Film Characters Who Suffered Horrendous Fates In Other Media

10 Hyped Movie Villains Who Turned Out To Be Just Henchmen

10 Internet Horror Stories That Should Be Movies

These Marvel Heroes Can Rejoin The MCU Soon

8 Filmmakers Who RUINED Their Movies By Explaining Them