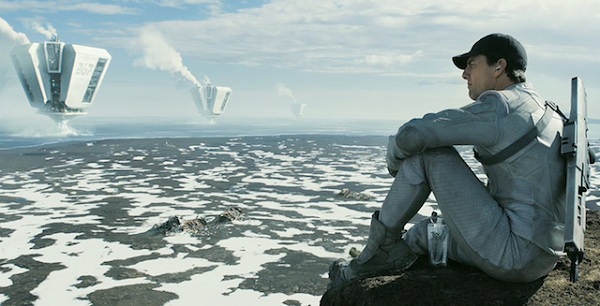 Back again are we? Good, Im glad. I can only deduce that this is a pity click, though, or one driven by a desire to escape your working life for an extra five minutes. Until that sorry day comes and we fight over my articles like a child in a custody battle, I am happy for your emotionally tender presence: the snuggling, the conversation and - all in all - our mutual love for one another 'til that day comes. However, me suggesting no-one is interested in Oblivion is poor judgment on my part. How could you not be interested? Tom Cruise breaks type and plays a short action hero in a film which looks like a live-action Wall-E. Dont pretend you arent ready for this.

What Could Be Awesome About It:

Once you breach the rather plot-mocking idea that this could be a spin-off on the part of the Church of Scientology which hypothesises all of its believers get to be taken away in a space shuttle after a war with the uninitiated Thetans by the Galactic Confederation destroys the earth (breathe!), the concept is kind of interesting. Although, no, I've now become extremely aware that nothing in Oblivion even comes close to being as exciting as any of that. Here's the plot: decades after a war with aliens, drone repairman Jack Harper makes a discovery that questions how much of the war was actually true and puts the fate of humanity in his hands. Essentially this film's hook comes in the mash-up of genre concepts: thriller/post-apocalypse/sci-fi/conspiracy. Its a concept that can't help but draw you in, and even the slightly disappointing trailer doesnt stop the story being interesting enough to want to be involved. On top of that, some of the scenery crafted in the poster and trailer is beautiful and shows off how this film is really going all-out in its crafting of a genuinely unique post-apocalyptic future. As of yet, proper details are thin, but the film has a neat hook. The premise is intriguing enough to keep us on the edge, and the trailer is enough to keep our expectations appropriately low: the combination of the two could mean we have a film that ends up shocking us.

What Could Suck About It:

Well, the trailer offered little to suggest this will be something that could well and truly knock your socks off: it looked particularly slow and ponderous with a notable emptiness of tension. Not your ideal set of criteria for a post-apocalyptic sci-fi film, hm? Simply put: it didnt quite know what it wanted to be and whilst the myriad of concepts make it feel like an exciting prospect, this could equally be the film's downfall (as it tries to hit a bunch of quotas but misses a general point. Similarly, casting Tom Cruise immediately sucks a level of excitement out of the film because we can already expect the performance we are going to get: the action only Tom Cruise of the 21st century and not the exciting one of the 80s and 90s. A lead who could add a grander sense of emotional depth and less predictability with his performance would help elevate this intriguing film to better levels. Sadly, I dont see that coming from Cruise and the film will suffer for it. Check out the trailer here: http://www.youtube.com/watch?v=ZokHZXb8QDs

While the premise is interesting and the visuals look stunning, it appears as though this film will fall flat from a crisis of identity - as well as its lead churning out another predictable action role. What do you think? Is Oblivion capable of reaching the heights? Let us know in the comments section below.
We need more writers about joseph kosinski, Tom Cruise and Oblivion! Get started below...
Contributor
Luke Stevenson
Contributor
Twitter