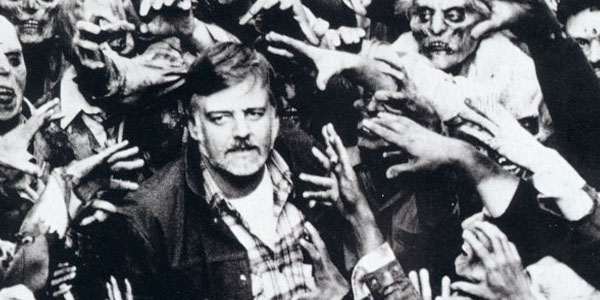 George A. Romero, you and I are no longer cool. Breaks my heart to say it, but you brought it on yourself. Now don't get me wrong. It started out as a love affair, George and I. He brought the zombies and the scary and I brought the popcorn and Twizzlers. It was magical. For a girl that liked horror movies from an early age, I couldn't get enough. I ended up married to (and then thankfully divorced from) Romero's #1 fan, and I say that with 100% certainty. We even spent vacations at the Monroeville Mall and Evans City Cemetery. Ah... young love. As time went on and his movies went on, even as I loved them, I did have some frustration with his choices and the fact that he broke many of the zombie rules he "created", but I stayed true, even when he didn't. When The Walking Dead came about, I was psyched. Already familiar with the comic, I had high hopes. The fact that Robert Kirkman acknowledged that he was influenced by Romero was, to me, complimentary and respectful. Too bad Romero did not see it that way, as he has been a brat about it ever since, and it ended our romance. To wit...... When initially asked about TWD before it really took off, he commented that they should have asked him to come aboard. Subsequently, after it became a hit, they did ask him to direct an episode and he turned them down. At the time he said it was due to his work on Zombie Autopsies. If only he had ended it there. He has gone on to say idiotic things such as, he did not want to be involved because they weren't "his" zombies. (Does he even know what HIS zombies are? Some think, some don't. Some remember their pre-zombie life, some don't. Some are slow, some are fast - sometimes they ride horses! Some talk, some don't. I guess in that respect, all zombies are his.) He proclaims he does not use excessive blood and gore because his movies are not about that. Oh. No. They are more about making a political statement or social commentary. He said his movies are about the humans and their stupidity, and he uses the zombies for fun. He said that TWD can almost be satirized and called it a soap opera. He has gone as far as to insinuate that he's been robbed. I find that to be rude, disrespectful and narrow-minded as well as complete and utter bull. Why stop there? Why not urinate on Kirkman's head? Based on my in depth knowledge of all things Romero and some recent research, I feel a little smack down is in order. First and foremost, he is operating under the misconception that he "created" zombies. The first zombie movie was made in 1932 with a few more to follow before Romero was even born in 1940. There were dozens more made before Night of the Living Dead even graced the big screen in 1968. How does one invent something that already exists? Copying and/or improving on its premise is all that would be left. He may be the "Godfather" of the zombie genre, but like a guest on "Maury" - he is NOT the father. It's important to note that he didn't even know he was making a zombie movie when he conceived Night of the Living Dead. He called them "ghouls." Therefore, it is ridiculous for him to presume he owns zombies and even more so for him to act all butt hurt when someone does what he did: copy or improve upon the premise.

Now, let's consider what he has said about the political overtones of his movies and the undertones of gore, which he firmly asserts he does not use to excess. Ah, yes. I remember back in the day when my teen friends and I were polishing our eye monocles, adjusting the tie of our smoking jackets and lighting our pipes, trying to find a movie that was social commentary, merely disguised as horror, and having to look no further than Day of the Dead. Yes, there was throat-ripping, arm-chewing and hacking off body parts, but all we could see was the biting, almost documentary like, statement about unlawful imprisonment. Who couldn't see the political message through that downpour of blood and chunks of chewed flesh? Well done, George, well done. We went right from the theater to register to vote. Newsflash..... whether he likes it or not, no one is going to his movies for social commentary. They are going to be entertained and to see blood and guts. Based on his own words and attitude, it's not hard to see what his real problem may be. He has stated more than once that he doesn't like the current popularity of zombies or that they have become trendy. He felt like they were something he always had in his pocket. Armed with the knowledge that "zombies" represent something else entirely in Romero's world, I'm going to go out on a limb and state in this instance, they represent money. He felt they were money in his pocket and he's been pick-pocketed by 28 Days Later, Zombieland, Dead Snow, The Walking Dead, etc. But let's look deeper...... Romero has been pitching the idea of a zombie series to the networks for years. For. Years. The answer has been "No, thank you." For. Years. AMC has said "YES! YES! YES!", like Meg Ryan having a fake orgasm in When Harry Met Sally, to Robert Kirkman. What it all comes down to is this: sour grapes. It's why he said that they should have gotten him on board at the onset and why he has refused to direct any episodes. He's insulted, angry and perhaps, greedy. I can understand that to any extent, but George, get over it. Land of the Dead wasn't very good and Survival of the Dead was crap on a stale cracker. You've come a long way since filming Mr. Rogers' tonsillectomy, but not so far that you can be afford to be so pompous. Fans are fickle. Be gracious, man and wish the new kid on the block well. 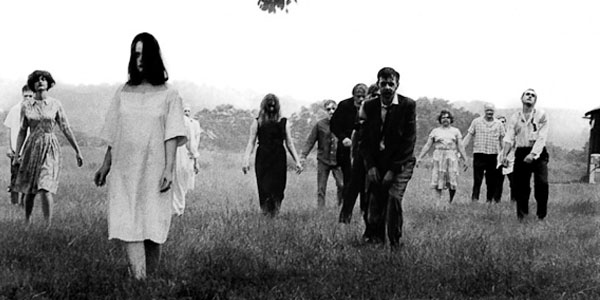 All that being said, what I find most irksome and what makes our breakup even worse than what Yoko did to The Beatles is that he has never watched The Walking Dead. How can one make the accusations that he has based on... nothing? If he gave it a proper chance, he would be pleasantly surprised by the subtext of this great show. Sure, it's got some gruesome walker kills, even cringe inducing people kills, but at its heart, it's about a group of people trying to hold on to their humanity in an often inhumane world that is overrun by monsters, both living and un-dead. If he ever stopped pouting long enough to watch it, he would know that. What a shame, as he is really missing out.
We need more writers about George-A.-Romero! Get started below...
Contributor
Tea Santos

A proud Lord of the Rings nerd, mom and sometimes writer.

10 Actors Who Refused To Return For Sequels To Acclaimed Films

Marvel Quiz: How Many MCU Characters Can You Correctly Identify?

She-Hulk: 10 Things You Need To Know About The Disney+ TV Series

10 Things The MCU Should Steal From X-Men: The Animated Series