(Re-posted my original review from May as Wall Street 2 is released in the U.K. from today)

Smartly put together and carrying an obvious agenda to finger-point, embarrass and shame (would we expect anything less from Oliver Stone???), 'Wall Street 2: Money Never Sleeps'debuted at the Cannes Film Festival this morning to a mild applause, but more encouragingly it played to an audience who seemed to be on Stone's side; welcoming and appreciative. I'm not going to go back on my earlier reaction. The 23 years on sequel really could be in with a shout for Best Picture at next year's Oscars. In truth though I had a tough time convincing the journalists I mingled with today during the post-Croisette screening chatter that it was in with a chance. Nearly everyone I spoke to hated the final twenty minutes or so of the movie, and I can see where they are coming from as (mild spoilers to come) the rug does get pulled from under us in a slightly disappointing switch-a-roo of character motives but I don't think it spoiled the 3/4th's of the movie that went before it and well, you kinda expected it to go down the route it did. It was a case of although the rug was pulled, we saw the joker roll down the carpet under us and prepare his trick from afar. I would find it hard for any of the elite critics audience I sat with not to see this coming, and we expected a Gekko movie to play out the way it did, I think. If I had a problem with anything and I suppose on reflection it did irk me a little - it would be the final moments of Gekko on screen where we are asked once again to rethink our moral position on events but I'm certainly not going to lose sleep over it.

The film begins with the effective and humorous scene of Gordon Gekko (Michael Douglas) as he is released from prison, something you have seen glimpsed at from the trailer, collecting the property he declared when he was originally busted. This includes an enormous 80's mobile phone and 'one money clip with no money in it', which got a big laugh. Nobody is waiting for Gekko outside, the first of many sympathetic notes to a damaged former giant who once had the world at his feet. The year is now 2000, but we quickly skip ahead to 2008, some 21 years after the much loved 1987 original, allowing events to unfold at the height of that year's stock market collapse. Stone's agenda is to really tell two stories at once; there's the changing-world of the scary financial system we are all living with right now, the worst of which could still be awaiting my generation, and then there's the family affair of which we side with Jake Moore (Shia LaBeouf), the Charlie Sheen-esque Wall Street hot-shot who has the hungry heart of Gekko but seems more grounded, and content.

He loves the pursuit of the win but also believes in responsibilities, and he is looking to make a honest woman out of Winnie (Carey Mulligan), a smart and sophisticated young woman who runs a successful blog Frozen Truth and just so happens to be the estranged daughter of Gekko. This despite Winnie hating everything to do with Wall Street after what it did to her father and her childhood, but although the irony is mentioned, we never do find out how Jake and Winnie originally got together. The plot then is obvious but no less unenjoyable. Gordon wants his daughter back in his life, and to play a real father after many years of no communication (she blames him for the overdose of Gekko's son, her brother, as he was absent in his time of need) and will use the kid Jake with inside information, play a new mentoring figure, to convince him to make it happen. Jake is so enamored with the now seemingly reformed Gordon (he has since become a successful business author) who has seen the error of his ways but still talks smart, and is still some showman, that he believes Winnie should be willing to allow Gordon back in her life.

Another motive for Jake is a desire for revenge against the modern day Gekko of Wall Street - Bretton James (Josh Brolin), who he believes was responsible for driving his original mentor Lewis Zabel (the incomparable Frank Langella) to suicide when he loses everything at the beginnings of the recession - and Gordon's the man who knows how to take Bretton down. So at the heart of what I guess is a family drama, is the question of revenge vs. power vs. love/responsibilities, and which one is ultimately the most important and which does our human nature most side with? To say anymore about the plot would be criminal, quite frankly but I must talk about the performances for a second, as with a movie like this it's the quality of actors that elevate the material. 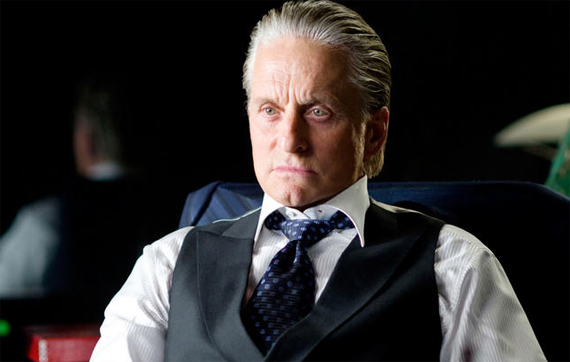 Gekko is of course the marquee name but this is definitely supporting material ground for him, and for most of the running time he takes a back seat to the younger actors. He naturally eases himself back into the role with restraint in line delivery and demeanor, but every now and again he will rekindle the fire with a speech of awe-inspiring power. "A fisherman always spots a fisherman from a far" is the new 'Greed is Good'. Oliver Stone decides to shoot Douglas in tiht fashion, and there's no real attempt to hide Gekko's aging looks.

The main part in this movie goes to Shia LaBeouf, a particularly controversial casting choice last year and he's definitely the weakest of the bunch. At least three years younger looking than he needed to be (Tom Cruise in 'The Firm' is more what they were aiming for I think), Shia just about gets by with his high intensity factor. A journalist friend of mine remarked that Stone needed an actor who could fill out a suit, and I have to admit in that department LaBeouf was left wanting. Crucially for the film, he excels in the two pivotal scenes with Josh Brolin and Michael Douglas, and he manages to get away with it. The scene involving LaBeouf and Douglas meeting each other for the first time on an extended subway chat is the single best scene in an Oliver Stone movie for years. Shot in one take, and in tight fashion, it reminded me of the brilliant moment in the original when Charlie and Martin Sheen shared that moment together in the elevator after the meeting with Gekko.

8 Actors Who Were Confused While Filming Movie Scenes

Doctor Strange In The Multiverse Of Madness: 10 HUGE Missed Opportunities

10 Behind The Scenes Documentaries Even Better Than The Movies