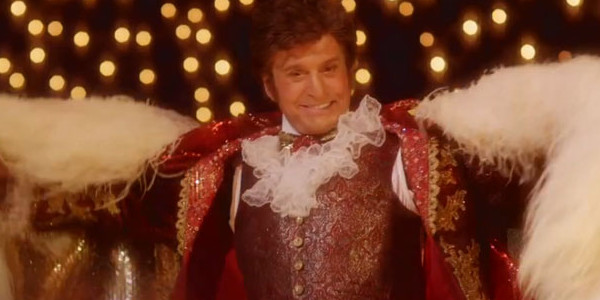 This was always going to be the most contentious of all the selections for some - the story of Liberace (Michael Douglas) and his tempestuous 6 year relationship with toyboy Scott Thorson (Matt Damon) was hardly ever the stuff of blockbusters, but with those two talents in the leading roles, and the considerable pull of Steven Soderbergh at the healm, it's a Made For TV Movie in different clothing. And how apt an evaluation that turns out to be - the story of the flamboyant stage artist and his younger lover might be as far from Soderbergh's excellent and under-appreciated Side Effects, and it may seem like the sort of thing actors well past their prime might take to a lesser cable channel, but the reality is an awful lot different. Behind the candelabras and the outrageous costumes is a love story with real friction, wrestling with a myriad of issues as big as Liberace's stage persona, as well as the grotesque monster of fame. Michael Douglas plays Liberace to perfection, wrestling away from early suspicions that his performance is a fur coat and no knickers caricature, to add layers to the flamboyant icon beyond the skin-deep persona and the rampant sexuality. His Liberace is a walking contradiction, yearning for love and wild, care-free sex with new partners all the time, and torn by an odd double desire to both sleep with and adopt Damon's Thorson. The screen loves him, and what could have been a very unsympathetic portrayal comes off as a celebration marked by a moral lesson. As the younger Thorson, on whose biography this adaptation is based, Matt Damon is also very good. There is a lot of the Boogie Nights/54 character arc in his development from doe-eyed comparative innocent to fully fledged Las Vegas queen, head full of cynicism and nose full of cocaine. His story is just as touching as Liberace's, even if both characters are genuine grotesque creations, and there's something of horror about how he is locked in a relationship with someone who insists he gets plastic surgery to turn him into a younger clone. It is Thorson's spiral into drug dependency, and his Liberace dependency that are the most gripping parts of the film, and Damon sells the degeneration well - far better in fact than he has been in any of his latest films. And the chemistry the actor has with Douglas is utterly irresistible, selling the love story entirely as one of reductive boundaries and destructive passion. The rest of what is an excellent cast is made up of Scott Bakula, Dan Aykroyd, Rob Lowe, and Glee's Cheyenne Jackson. Lowe in particular is genius as Dr Startz, the man behind Liberace and Thorson's plastic surgery, as well as Thorson's drug dependency: his face pulled comically tight by surgery, and the generous invitation to over-extend some reaction shots to make him seem even more of a clown. The only real problem is the length - it's ever so slightly too long and sags somewhat in the middle, before the facelift of the last act, which makes you pine for more of the conflict between Thorson and Liberace that came with their break-up. But it's not a fatal problem by any means, and there are enough high points - the humour, the character portrayals and the brilliant, pithy dialogue - to more than earn this a high rating. It might seem strange to see what amounts to a made for TV film playing in such auspicious surroundings, and in the main competition to boot (veterans of the fest may have expected it to play out of competition,) but Soderbergh's presence sways it away from the usual TV trappings, and this isn't your usual TV substance anyone, having been picked up by HBO to screen in America on 26th May. Cannes also has previous, having played other projects like this - like Oliver Assayas' Carlos - in the past. It all comes down to the question of justification - does the film warrant the inclusion of as bright a star pair as Michael Douglas and Matt Damon? Undoubtedly so. Is it worthy of Soderbergh's attention? Infinitely - Soderbergh brings the same conviction to tight story-telling, albeit on a different scale, as he always has. It is a genuine shame that we aren't going to see any more of his artistic visions brought to life, if indeed he can stand retirement. And finally, is it worthy of your attention come May 26th? Definitely.
Want to write about Matt-Damon, Steven Soderbergh, Michael Douglas, Cannes 2013 and Behind The Candelabra? Get started below...
Contributor
Simon Gallagher
Contributor
Twitter

10 Movie Universes That Make NO SENSE

8 Wrestlers Who Did Their Finisher In Recent Movies