Horror remakes have proven themselves time and time again to be rather tricky and problematic to execute with enough justification for their mere existence. That intricate delicacy is heightened when the movie youre remaking, Carrie, is not only an Oscar nominated film and acclaimed novel by Stephen King, but one of the horror genres greatest achievements in general. Some will go into this 2013 modernization wondering what the hell the point is while others unfamiliar with the story will most likely be finally pushed over the edge to see what the fuss is about. Fortunately, for everyone involved from the actors to the viewers, whether youre familiar with Carrie or not, its easily one of the more respectable facelifts delivered upon to us by Hollywood. This updated version would be dead in the water without acquiring some fantastic acting talent to match Sissy Spacek and Piper Lauries Oscar nominated performances from the 1976 original; something that the studio and Director Kimberly Peirce (Boys Dont Cry) were clearly aware of. The result is Chloe Grace Moretz taking up the mantle as Carrie while veteran Oscar nominated actress Julianne Moore gets the honors of playing her religiously fanatic and unworldly insane mother.

The gist of the plot hasnt really changed (if anything it feels like a direct remake) as high school Senior Carrie leads an introverted lifestyle struggling to fit in with her peers socially. After Gym one day she receives her period for the first time surrounded by these aforementioned peers in the school showers, but due to this overly sheltered and reclusive lifestyle she is unable to comprehend what is going on and hysterically makes a scene in fear that she is legitimately dying. This causes her classmates to bully her and toss tampons at her. Amidst this stress and confusion Carrie also discovers that she has telekinesis and can manipulate objects with her mind. Not so surprisingly, her mother doesnt take it well and is further convinced that the Devil has gotten a hold of her innocent and pure daughter. As Carrie tries to grasp an understanding of her powers through research, the bullies come to a realization of shame and regret as they are punished by their teacher with possible expulsion from the upcoming prom. An evil and downright nasty classmate, Chris disagrees however and feels that their bullying is justified because Carrie is stupid. On the flipside, her friend Sue feels so much regret that she forces her boyfriend Tommy to take Carrie to the prom as an act of moral redemption. Ultimately, this familiar story is where Carrie is going to divide audiences; on its own merits, everything about this remake from the acting, to the pacing towards the climactic prom sequence, and to the overall themes of bullying (which feel more relevant now than in 1976) being conveyed are spot on to the point where anyone unfamiliar with the source material will leave the theater saying I get why this is hailed as a masterpiece. Those watching the remake aware of where the story is going however, will constantly have déjà vu and probably restless anticipation to reach that chaotic catharsis at prom. And that boredom is something that not even the acting can fully save regardless of how fantastic Chloe Grace Moretz sells the mysticism of her powers or unnerving dialogue with Julianne Moore whom by the way, also delivers a haunting performance as this religious zealot with disturbing make-up effects and long flowing dead brown hair. There are opportunities present all throughout this remake to capitalize on the modernization of a classic story and the filmmakers actively go for it at points but seemingly have no clear direction on where to go with it. Its a shame too because bullying is so rampant nowadays that you cant help but feel that there is a missed opportunity here to emphasize that atrocious behavior in ways that could substantially add dramatically to the story. Instead all we bear witness to is a movie that says bullying is evil, but is too afraid to do anything outside the shadow of its legacy. In other words, youre left going through the motions until you hit the gore filled third act; prom. 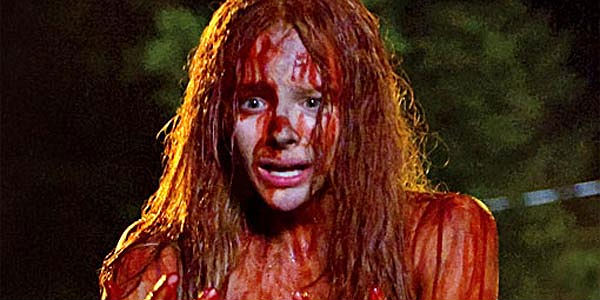 And speaking of prom, just as in the original the sequence is able to reach a breaking point for both Carrie and the audience in chaotically vengeful bloody fashion. We love watching the vengeance just as much as Carrie relishes in delivering it. A large part of that emotional reaction most definitely comes from a strong supporting cast that is also able to disgust us in morally reprehensible ways, regardless of the fact that its all something we have seen before. My only real gripe with the action is that for some inexplicable reason, a lot of the telekinesis special effects appear as if everything is supposed to be in ridiculously cheap and unnecessary 3D, but no 3D version of the film exists which makes these scenes all the more jarring to watch. Its almost as if the movie was planned to have 3D effects added in during post-production but never did for reasons unknown. After all the satisfyingly gory mayhem and carnage were also unfortunately treated to one of the most rushed and lazily constructed ending scenes Ive ever seen in film a before. Thankfully its so quick that it cant really damage your overall opinion of the movie too much but you will say wow at how unnecessary and cheesy the closing shot is. In conclusion, there are far, far worse remakes out there to be found both in horror and cinema in general, and while Carrie isnt the second coming of a masterpiece its still a well-made film with superb acting that is able to encapsulate what makes the original so special, even if it does often feel like one giant uninspired retread. If you dont know anything about the original film or the novel however, the film will come across fresh and unnervingly awesome and engaging.

Carrie is in US theaters now and opens in the UK on November 29th.
We need more writers about Julianne-Moore, Carrie, Chloe Grace Moretz, Reviews and Kimberly Peirce! Get started below...
Contributor
Robert Kojder
Contributor
Twitter
Facebook

10 Movies Ruined By Listening To The Fans New

10 Mistakes The MCU Made (In Hindsight!)

10 Movies ONLY MADE In Response To Film Critics

12 Shelved Movies That Would've Been INSANE