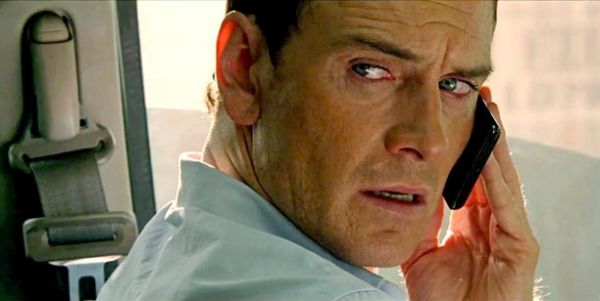 Jean Luc Godard once pointed out that a movie can be best criticized by making another one in response to it. In the case of Ridley Scott and Cormac McCarthy's The Counselor, a stilted, cynical exercise in pretension, the reverse is true. If there was anyone out there that didn't value No Country for Old Men before, seeing this new film will give them fresh respect for the Coen Bros efforts in adapting that nihilistic thriller. If you never considered how difficult it was to bring McCarthy's vision and dialogue to the screen with the intelligence, suspense and emotion intact, consider a scene here where Javier Bardem existentially questions commitment while recounting a story of Cameron Diaz mounting the windshield of his car in a performance he assesses as "too gynecological to be sexy." This is a far cry from that symbolic general store coin toss in Country. Likewise, the 80-year-old McCarthy, armed with book awards out the wazoo, has wandered from the land of milk and honey here, delivering a script that is easily--and depressingly-- the worst thing he has ever written. A fine storyteller with a sometimes-profound grasp for using language to create worlds of poetic truth, McCarthy stumbles grandly with The Counselor; he presents all the pieces necessary for a pulpy slice of lurid neo-noir and then proceeds to stand outside the material, looking down on it and pausing to occasionally spit. The dialogue, delivered from the mouths of several bland, doomed ciphers, is ponderous and hokey, set against the backdrop of stunning compositions highlighting the ruthless beauty of the American Southwest. It's as if Ridley Scott wanted to shoot a PSA about the dangers of the cartel, adding big-name actors to read fortune cookies while staring off beyond the camera at some imaginary paycheck on the horizon line.

Michael Fassbender plays the titular character (never given any other name by the script), a mostly upright lawyer whose proximity to criminals eventually tempts him to join them in a convoluted and vaguely understood drug scheme. Fassbender's friend, the fatally relaxed, morally ambivalent Reiner (Bardem)whose lifestyle is mostly one long, carnal parade with the icy temptress Malkina (Diaz)cautions him against implicating himself with the shadowy management behind these deals. There's a long, descriptive mention of a bolito; a device with a constricting wire that's dropped over the heads of victims and then continues to coil, untilviola!off with your head. Only comatose audience members will fail to guess that the bolito will get its full gory due before the credits. What's more surprising is that such a moment would feel like it was lifted from a schlocky Hellraiser clone, and that the big name on the receiving end would have considered this a satisfactory exit. There are only a handful of main characters in The Counselor; in addition to Fassbender, Bardem and Diaz, there's also Brad Pitt as middle man Westray, who tells his ownpredictably prophetic tales involving snuff films, Penelope Cruz as Fassbender's vibrant and mostly demure fiancé, and Rosie Perez as one of the Counselor's imprisoned clients. None of them amounts to much because the script lacks the details of their relationships to one another and to the plot at large. The myriad of secondary faces that appear throughout are colorful, but forfeit dimension and purpose. Say what you will about Quentin Tarantino, but he has a passion and care for his quirky, offbeat characters that extends beyond their external absurdities. McCarthy shows only cruelty to this lotnot because he dispatches so many of them in brutal ways, but because he denies them an initial humanity that would make us care about their eventual destruction. Ridley Scott remains a technical helmer of great skill, but he's confounded by the script. There are great-looking scenes in The Counselorthe two instances of deadly wire are remarkably well shot and stagedbut no great scenes themselves, precisely because the imagery and the dialogue are at such odds with each other. McCarthy is writing as if his words are everything, and Scott is directing as if the visual component is all that matters. This is a movie that feels like it was constructed in a vacuum, with no collaboration to reach a marriage of its ideas and atmosphere. A perfect example is Diaz's previously mentioned encounter with Reiner's Bentley; Bardem's strained, quizzical face telling the story is really enough, but Scottprobably suspecting it was an absurd momentgoes one more and films the scene in full-on flashback, windshield twerking and all.

Under all of this McCarthy seems to be aiming at a point about life within the influence of the drug trade, especially in tumultuous border towns. The primary characters, Perez aside, are affluent outsiders who will happily cash-in on the misery of those whose misfortune they will never have to witness. The script turns and puts them in those unfortunate shoes, but the message doesn't stick. One lonely shot of a body falling forlornly from a dump's bulldozer is intended to drive home this sadness. Instead, it only underscores the film's failure at empathy. In many ways, The Counselor is as ruthless and barren as a low-rent torture flick. Both abuse their characters without offering them complexity or texture. When The Counselor ends, there may be an inclination to stop, reconsider it and then take inventory of its plot points and reveals. Frustrated filmgoers may get stuck on solving what seems like a complex set-up, but they shouldn't be distracted from the inherent bankruptcy of the entire enterprise. Even if one could perfectly know why Fassbender's character ultimately gets involved, what the ins-and-outs of the drug transport are, or how each of the coincidences was engineered by the villain, that knowledge would not make this film any more effective, entertaining or gratifying. One acquiescence towards greed and betrayal of standards is all it takes to undo a man, the movie seems to say. McCarthy would do well to ponder this before brokering any more screenplay deals.

The Counselor opens in wide release in U.S. theaters this Friday, October 25th and in the UK on November 15th.
We need more writers about brad pitt, Ridley Scott, Cameron-Diaz, Penelope-Cruz, Javier-Bardem, Michael Fassbender, The Counselor and Reviews! Get started below...
Contributor
Nathan Bartlebaugh
Contributor
Twitter

10 Actors You Forgot Were In The X-Men Films

10 Best Space Movies Of All Time