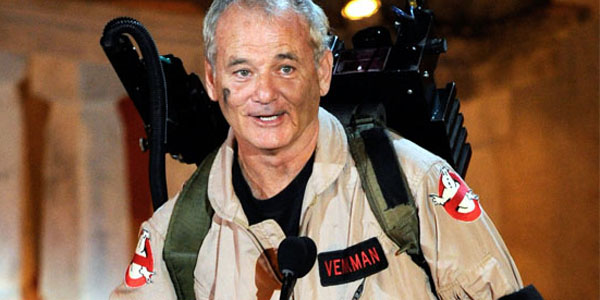 As of today, a proposed "Ghostbusters III" looks just about as far away from happening as it ever did. In truth, not a great deal has changed in the two decades since talk of turning the franchise into a trilogy first reared its head. Dan Ayrkroyd is desperate for another film to happen and is doing 99% of the legwork to make it so. Harold Ramis is happy to do another one but isn't as obsessed with Aykroyd about the idea. Ernie Hudson... well nobody cares what he thinks about it, but he's just glad for the work. But Bill Murray is the one with the reservations and the one member of the busters team that has forever stopped the film from happening. He is the biggest star of the saga but sadly its biggest antagonist. He didn't enjoy making the poorly received (but still tremendous fun I'd say) Ghostbusters II in 1989 and has moved on to other things, showing about as much enthusiasm for a sequel as he would for another of his cold showers in Groundhog Day. A few years back Sony, likely sick of the constant calls and emails from Aykroyd, but also because of the success of the 2009 video game that reunited the whole original cast (yes even grumpy old Bill), clearly thought they could tempt Murray back for a full feature. They thought they could make it work. The hiring of "The Office" and "Bad Teacher" writers Lee Eisenberg and Gene Stupnitsky to develop a Ghostbusters III script indicated that they thought Murray, who seemed to enjoy the time spent with his old pals, could be tempted for one last go with the proton pack. The original series director and producer Ivan Reitman soon attached to helm, Sigourney Weaver (the love interest from the original had agreed a return) and the film looked like it would happen. 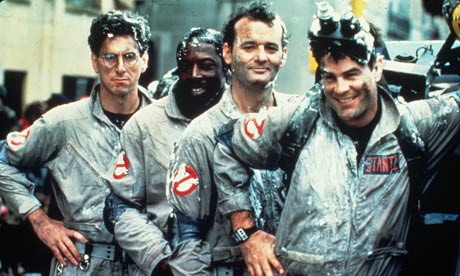 Then silence came... no forward momentum seemed to be gaining on the film, despite Ayrkroyd's deceptive press talk hiding what was the dark truth of the project. That he couldn't get Murray to read their idea for the threequel. The wheels well and truly came off about a year ago when the news emerged that Murray hadn't even shown his Ghostbusters pals the courtesy of reading the screenplay after months of having it on his desk. He then swiftly signed on to spend 2011 shooting the drama "Hyde Park on Hudson" and that was it... Murray had shown his cards. He had no interest in ever making Ghostbusters III and everyone knew it. That left the project doomed. Without Murray, Sony have no faith in drawing money from the series with three middle aged man that few of those born after Ghostbusters II was released would recognise. The Ghostbusters movies aren't cheap to make and Eisenberg and Stupnitsky had been writing a $150 million budgeted project, one that desperately needed a marquee star to lead. Last month Aykroyd admitted for the first time that the film was unlikely to happen with Murray as one of its stars and that a re-casting of the Peter Venkman role could even be required for the movie to happen. Now in a new interview with The Telegraph, Aykroyd reveals that Murray definitely won't be in the film and that the project could be doomed altogether;

"I honestly don't know. At this point it's in suspended animation," he said when asked about the film's status. "The studio, the director Ivan Reitman and Harold Ramis feel there must be a way to do it, but Bill Murray will not do the movie. He doesn't want to be involved. He's got six kids, houses all over America. He golfs in these tournaments where they pay him to turn up and have a laugh. He's into this life and living it. I know we'd have a lot of fun I can't be mad at him. Hes a friend first, a colleague second. We have a deep personal relationship that transcends business and he doesnt want to know."

Then speaking about the possible Bill Murray re-casting, Aykroyd admitted that one possibility was another acting portraying Venkman but that he didn't want to disrespect the original;

" are not going to do a movie that exploits the franchise. The script has to be perfect. I'm the cheerleader, but I'm only one voice in the matter. It's a surety that Bill Murray will not do the movie, however there is still interest from the studio."

So according to Aykroyd Sony haven't fully put the sword to Ghostbusters III but I have to believe it will happen soon. The idea of recasting Peter Venkman is a stupid, asinine thought because you are not re-casting Venkman, you are re-casting Bill Murray. This isn't like another actor playing James Bond. Murray is Venkman, all his character traits were Murray's. A better idea is just to kill him off altogether but then with Ramis, Hudson & Ramis and Sigourney Weaver in there, they are missing a star to convince Sony to sign that expensive cheque. You have to believe the outcome of all this will be Sony asking Aykroyd if he will give up the reigns of the series for a reboot with younger, fresher faces. Ironically then the one man of the original crew desperate for it to happen may then be cast aside...
We need more writers about Bill-Murray, Harold-Ramis, Ghostbusters 3, Dan Aykroyd, Ivan Reitman and Ernie Hudson! Get started below...
Editor-in-chief
Matt Holmes
Editor-in-chief
Facebook