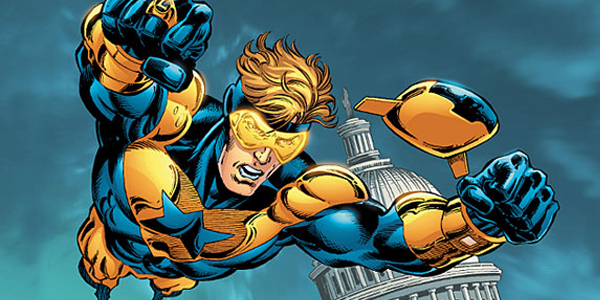 As DC (finally) moves forward with crafting their own cinematic universe, they will have to pick and choose between their vast array of characters to find out what works best on screen. They've already relaunched Superman, and are bringing Wonder Woman and Batman to the party in 2015. We've heard countless rumors about what other characters may be appearing, what DC's overall plan may be, and whether or not a Justice League movie is imminent. When it comes down to it, we really know nothing about what they might be planning, and, sadly, will just have to wait. If a Justice League movie does happen, it's pretty easy to guess which characters they'll decide to bring to the big screen. The big three are already a lock, and you can bet that The Flash, Green Lantern, and Aquaman won't be far behind. But what about some of their lesser-known or second-tier characters? Martian Manhunter? Hawkman? Green Arrow? Or, dare I say, Booster Gold? I've mentioned Booster Gold in an article before, and believe he could be a great character for DC to bring to life on screen. There was that great little Booster Gold easter-egg hidden in the Metropolis fight in Man of Steel, so the character is at least somewhat part of the film universe. If done right, he could potentially be DC's Iron Man. I know that Batman has basically filled that role, but I think Booster Gold could potentially be a better fit, and hopefully a massive hit with audiences! He has a lot in common with Marvel Studios' flagship superhero (on the big screen, anyway), which is something DC can definitely use to their advantage. If you remember, Iron Man was far from being a popular character before 2008. He was a second-tier character at best before being plucked from relative obscurity and thrust into mega stardom on the big screen. If DC plays their cards right, Booster Gold could follow suit. Here are 4 ways Booster Gold can become DC's Iron Man, and bring them loads of money in the process...
Contributor
James Garcia
Contributor
Twitter
Facebook