It is, some say, a Roger Moore Bond movie without Roger Moore in it. Thats because Diamonds Are Forever  which celebrates its 40th anniversary this week  is as camp as Glastonbury in June. Camp? Yes. Camp. Look at the evidence: it has saucy innuendo galore (You seem to have caught me with more than my hands up); a Shirley Bassey-delivered title track with Don Blacks ooh-er lyrics; a gaudy Las Vegas setting; gay hit men; a moon buggy chase; plus Ernst Stavro Blofeld holding the world to ransom with an outer-space death ray. You know. That kind of camp. It might have been different had George Lazenby returned for a second bite at Bond, or if American actor John Gavin (from Psycho) had played 007. In fact, Gavin had already signed a contract but, at the last minute, due to studio jitters, Sean Connery was made an offer he couldnt refuse: a record-breaking $1.2 million (which he promptly donated to a Scottish educational trust) plus backing for two non-Bond films of his choosing (although, in the end, only one was made: The Offence). Since Christmas Day 1978, Diamonds Are Forever has been on UK television every 27 minutes (it feels like it sometimes, at any rate). But should you need reminding, here are some of the best and worst bits of this jewel-encrusted 007 movie juggernaut

Hes rapidly approaching middle-age and packing a few extra pounds (Theres a lot more to you than I had expected! says wide-eyed, negligee-wearing saucepot, Tiffany Case), but 007 is still able to dispatch villains with consummate ease and has a right old commotion going on in his trousers, judging by his antics here. Hes also sadistic (There's something I'd like to get off your chest," he purrs, strangling a sexy informant with her bikini top) and an insufferable smart-arse. For instance, savouring Sir Donald Mungers sherry, Bond guesses that it's a 51 vintage. M, however, is not impressed and huffily reminds 007 that there is no year for sherry. I was referring to the original vintage on which the sherry is based, sir, smirks Bond. 1851. Unmistakeable. Connery steps on the comedy pedal through most of the movie  so much so, that when he thwacks Tiffany with his tie in an interrogation scene, it jars. This is, for the most part, a totally different Bond to the one he played in Dr No and From Russia with Love.

Tiffany Case (lets call her Bond Girl 1 in a slightly chauvinistic manner) is, natch, a total sex bomb  but one who undergoes a dramatic personality transformation in a little under two hours. When we first meet her shes feisty, streetwise, has a smart, somewhat obscene mouth (Blow up your pants!) and is easily a match for Bond. By the end, she is a twit of Mary Goodnight proportions who cant even fire a machine gun without falling backwards off an oil rig. Tcha. The statuesque Plenty, meanwhile, (lets call her Bond Girl 2) spends her short screen time in and out of a low-cut purple dress, living up to her name.

Times change  and so does Blofeld. In You Only Live Twice, the megalomaniac mastermind was vaguely mid-European (Goodbye, Meester Bond!); in OHMSS he appeared to be from The Bronx. In Diamonds Are Forever, he sounds as though he hails from Home Counties England. He has also managed to grow some hair. This Blofeld is not adverse to appearing in drag to make a quick getaway, and he has some good lines, albeit with a Carry On flavour, especially when Tiffany hides the control tape for his death-ray satellite in her bikini briefs: Tiffany, my dear. Were showing a bit more cheek than usual, arent we? Such nice cheeks too. If only they were brains. Blofeld also threatens to blow up Kansas with his death ray, but then has a change of heart. If we destroy Kansas, the world may not hear about it for years, he deadpans. Which is REALLY funny. Unless you live in Kansas. But is he still the main man in SPECTRE? We only ask because his worldwide criminal organisation isnt mentioned. Which is disappointing, frankly. Still has a white cat, though.

In the original Fleming novel, Wint and Kidd are a couple of standard hoods. Here, theyre vicious if fey killers who actively enjoy bumping off members of the diamond pipeline. Its also implied that they are gay in various subtle and not-so-subtle ways. (For an example of the latter, witness the end He certainly left with his tails between his legs scene. Well, it was 1971.) Glover and Smith are ace  and the film picks up whenever they are on screen.

Just who are Bambi and Thumper? Are they employed by Blofeld? Or are they unwittingly working for him via his right hand man, Burt Saxby? If so, why does Willard Whyte (who they seem to be keeping prisoner) refer to them as my friends? By the way, in various reference sources, Bambi is sometimes wrongly credited as Donna Garrett; but, fact fans, is actually played by gymnast Lola Larson. (Stop us if were you know)

There are various contenders in Richard Maibaum and Tom Mankiewiczs fizzy script, but Numero Uno has to be this (no pun intended) gem: when asked by Tiffany Case if he prefers blondes or brunettes, Bond replies: Oh, providing the collars and cuffs match When you are 11, you dont understand this. http://www.youtube.com/watch?v=sf4xw4mE2Xk Honourable mentions also go to the oft-quoted casino dialogue when Bond meets the unfeasibly statuesque Plenty OToole (Named after your father, perhaps?); and the final scene on board the ship when Wint and Kidd, disguised as waiters, hide high-explosives in Bonds la bombe surprise. Umm, that looks fantastic, says Tiffany. Whats in it? Ah, says Wint. But then there would be no surprise, would there, Madame? Also, is Tiffany REALLY co-operating with 007? Oh, I can vouch for that, says a visibly exhausted 007. Sid James would be proud.

There arent any awful clunkers, but Tiffany Cases You just killed James Bond! is probably the weakest. Although Blofeld has a corker too which, apparently, Broccoli hated and demanded to be dropped from the script: As La Rochefoucauld once observed, Mr Bond, humility is the worst form of conceit." Er you what? Despite Broccolis objections, it still made the final cut.

The one that everyone remembers occurs during the car chase when Bonds Ford Mustang tips up on two wheels to enter an alleyway. An error in filming meant that the car exits the alley on the opposite two wheels; although this problem was solved in editing by the insert of a close-up shot of Bond and Tiffany tipping up the other way, mid-stunt.

Its goodbye to smart, chic, Sixties cool and hello to Seventies excess (although the fashion rot had already started to creep in during OHMSS). Connery makes his first entrance wearing a frightening towelling shirt affair and Jesus sandals and looks as though he's just off to a Spinners' concert. Later he wears a very short salmon pink tie with a cream suit. Yuk.

Blofeld is gathering diamonds to make a giant laser death beam. And Bond has to stop him. Or something. Whatever: the jokey tone of Diamonds is noticeably different to that of the previous film, OHMSS, and goes out of its way not to mention that movies downbeat ending (Blofeld & Irma Bunt: 1  Mrs James Bond: 0). Then again, Bond does off a Blofeld lookalike in the pre-title sequence with some relish. Miss Moneypenny is a leetle insensitive to joke about him bringing her back a diamond ring from Amsterdam, mind (Would you schettle (sic) for a tulip? asks Bond before revving off.) Connerys return to the role was big news in 1971. When Sir Donald Munger (The Persuaders Laurence Naismith) says Youve been on holiday, I understand. Relaxing, I hope? hes talking to Sean Connery, the actor, not Bond. Oh, hardly relaxing, says Connery, who had been off making Shalako and The Molly Maguires. But, er, most satisfying. 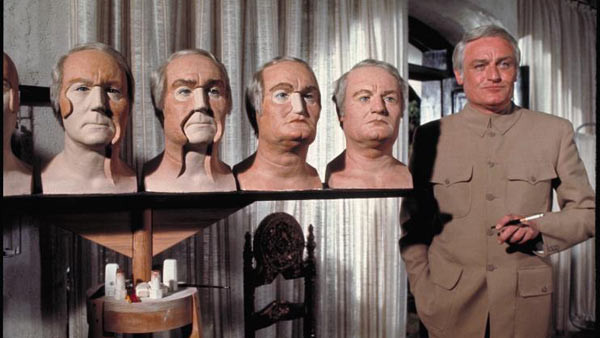 When Bond slips on his shoulder holster, tells Tiffany hes just popping upstairs for a moment, climbs out of his Penthouse window and stands on top of the elevator running up the outside of a Las Vegas skyscraper. Minutes later he shoots Blofeld in the head with a piton gun. But  doh!  its a lookalike. AGAIN. The Connery cool is in overdrive here.

Easy. An elephant plays a slot machine and trumpets when it hits the jackpot. The moon buggy chase is really funny when youre 11  but its less so now. The car chase is thrown in to make up the numbers. And when Blofelds diamond satellite death ray fans out, it looks as though someone in special effects said: Hmmm. Yeahhh OK. Thatll do.

http://www.youtube.com/watch?v=avAeh9L3Txw The musical genius that was John Barry does it again. This time his score is both sultry (the title track) and eerie (the music which accompanies Wint and Kidd). A track called 007 and Counting  over shots of Blofelds death ray in action  is, pretty much a rerun of Barrys Space March from You Only Live Twice; but it works beautifully (the visuals it accompanies not so much). We also get a welcome blast of the rousing 007  Barrys alternative James Bond theme (called To Hell with Blofeld on the soundtrack album). For the main theme  and especially the lines stroke it, touch it and undress it  Barry apparently told Bassey to imagine she was singing about er a penis.

Incredibly its by Guy Hamilton who, seven years earlier, made what is arguably the ultimate Bond, Goldfinger. After this, rather less incredibly, he went on to direct Live and Let Die and The Man with the Golden Gun. Despite Connerys presence, Diamonds are Forever is not a fan favourite. On the Bond website message boards, it usually ranks on or near the bottom of the pile (along with The Man with the Golden Gun, A View to a Kill and Die Another Day, since you asked). That said, on commanderbond.net, a poster called freemo recently wrote a mammoth defence of the movie, detailing everything he (or she) likes about the film, frame-by-frame. At WhatCulture, were not quite so keen  but we do see freemos point. Its got Connery in it, for starters, and despite being fuller in the face and thicker around the middle, he packs an electric charisma. There are some solid set-pieces, too: the fight in the lift; the two-wheel car stunt; the cremation scene; Wint and Kidd; Jimmy Deans good-ole boy performance as millionaire Willard Whyte; Jill St John smouldering under a white fur rug (when youre 11, thats bloomin fantastic  and still is); some whip smart dialogue, Ken Adams sets and John Barrys dreamy title theme and mysterious score. On the downside, the plot meanders, the special effects arent special, the fashions havent aged well and its all played for chuckles rather than suspense. Look, God knows its not art. But even a below-par Bond has its good points. So happy 40th birthday, Diamonds Are Forever
We need more writers about Sean-Connery and Diamonds Are Forever! Get started below...
Contributor
Tony Greenway

Tony Greenway hasn't written a bio just yet, but if they had... it would appear here.