6. Leonardo DiCaprio Asked Tarantino To Include A Speech On Phrenology 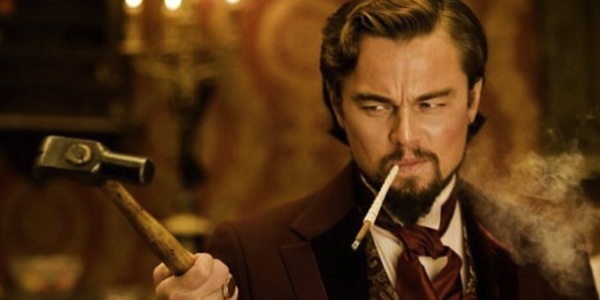 One of the movie's most undeniably tense and grotesque moments comes when Calvin Candie learns that Django and Dr. King Schultz are attempting to deceive him in a ruse to reclaim Broomhilda mid-way through dinner. As a result, Candie returns to the dining table and launches into a horrifying speech based around the theories of "phrenology," removing the skull of a former family slave from a box on the table as he does so. Eventually, his ego damaged, the plantation prince explodes into a fit of rage, one the likes of which we've never quite seen from a Leonardo DiCaprio character. So what is phrenology? Back in 1858, phrenology was a pseudo-science that dealt with the measurements of the humans skull - it was beloved by racists in their masses because it gave them a "basis" for their bizarre views on the differences between white people and black people. Like Tarantino, Leonardo DiCaprio is fascinated in real-life with the period in which Django Unchained takes its scene, and particularly with themes of slavery. Convinced that Candie would himself be well-aquatinted with the "science" of phrenology, DiCaprio sent Tarantino a bunch of materials and suggested that he write Candie a speech based around the subject, the result of which made it into the movie.
Contributor
T.J. Barnard