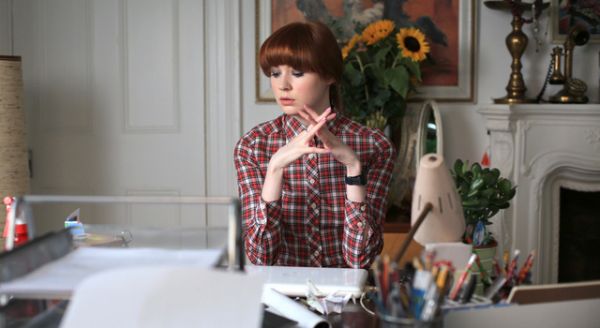 I stumble into this year's Edinburgh International Film Festival like a startled deer, this being the first year in living memory in which I've missed a substantial part of the Festival. Having only returned to bonnie Scotland on Sunday, I have missed the first week and many of the headlining films. These include this year's opening film, Breathe In, as well as Sofia Coppola's much-talked-about The Bling Ring and Monsters University, the new Pixar (last year's Festival closed with Brave, a movie at least as Scottish as Brigadoon). So my blogs and reviews this year will necessarily give only a hint of what has been on offer, but so it always goes with a Film Festival; even the most astute attendee is likely to miss many gems, and endure both high-profile twaddle and films that will vanish, post-festival time, into the abyss of arthouse hooey. Remember Los Muertos? Dear Pillow? Last year's Life Just Is? Of course you don't. Other than me, no one does. But the wounds have not fully healed. This year I started, perversely, with the closing night film. The clues should have been there, and no doubt a part of me was sceptical. The quality of the closing night films have for some reason slipped in the past few years; I recall seeing closing night film American Splendor at the Odeon Clerk Street. That was a lovely, old-fashioned cinema so, of course, it is now closed. In the past few years such curios as Faintheart and Third Star have closed the Festival. This year it's a film called Not Another Happy Ending (worrying title). Which is a movie made and financed in Scotland (even worrying-er). And it's a romantic comedy (oh dear God). Karen Gillan, until recently known primarily as Matt Smith's companion on Doctor Who, plays a writer who has a lot of success with a book which she titles "The Enduring Pain of My Father." Ill come back to that. Her father reads the book and turns up at a book signing, having abandoned her when she was just a child. Being Glaswegian, he was of course an alcoholic. He turns up at a book signing. That scene youve just imagined in your head, the one with her asking who to make it out to then looking up, tearful, to see her father standing in front of her  yep, exactly that. About that title. It must be the worst title of all time, even in the arena of fake-titles-in-movies, where it stands besides the likes of The Flower That Drank The Moon (which at least was ironic). She has an editor who changes it to Happy Endings, which infuriates her. He, incidentally, is a handsome, impulsive, passionate Parisian who drives her up the wall, while her partner is a smug twit, also a writer, who ignores everything she says. I wonder how that will end. The editor, Tom (Stanley Weber) has her contracted to another book, which she wants to get finished and move on to another publisher. However, shes blocked. This, Tom reasons, is because shes happy, and she needs to be miserable to write, so he contrives to make her miserable in a subplot every bit as idiotic as it sounds. And then when her lead character starts appearing in her life and talking to her Christ, Im boring myself. The only laugh I had at Not Another Happy Ending (the title is a lie for a start) was afterwards, reading the entry in this years catalogue which describes it. This is a fun game I often play, as the linguistic and philosophical athleticism involved in making mechanical, clunky nonsense sound worthy is always interesting. Reading the entry closely, it strikes me that the writer, EIFFs artistic director Chris Fujiwara, doesnt think highly of it either, given the number of times he mentions the photography of Glasgow, and that the highest compliment he can muster is that its smoothly done. I also agree with him that the set piece involving our protagonist running across Glasgow to make a pub quiz, or disappoint her estranged father, is memorable. Just not for the right reasons. *****

A strange version of relativity exists at Film Festivals, and NAHE was so bad that Im not sure how much my pleasure upon seeing Everyones Going To Die depended on my irritation with the former. It was a small delight however, made on a tiny budget with a fairly bare-boned narrative, and infinitely more involving that the dreck that preceded it. It follows two strangers who meet by chance in a restaurant: a German girl living in Britain with a callous fiancé (never seen onscreen) and a reserved, charismatic drifter with a shady past, and possibly present, who is in town to pay his respects to his recently-buried brother. It is described in the programme as a gangster screwball black comedy, and perhaps some elements sound like they fit that description; one sequence has the pair visit his brothers family, who are Wiccans and believe that he has been reincarnated as a cat. But the tone isnt screwball, and neither is the meditative speed at which it plays out. It is not heavy on exposition, and lets us learn about the characters as they learn about each other. The central performances are therefore fundamental, and the challenge is more than met by German TV actress Nora Tschirner as Melanie and Robert Knighton as Ray. Knighton was until recently a carpet fitter in London, and yet he has charisma and talent that many professionally trained actors would kill for. I did not know anything about him when I saw the film, and kept trying to work out if Id seen him somewhere else; he was too good to have come out of nowhere, surely. The film is made by directing duo Jones, about whom I know absolutely zip. I will be keeping an eye out for their future projects; their work has an assurance and maturity that is too seldom seen in British cinema. Occasionally it drifts a little too far into the realm of navel-gazing (one line, I feel like I should say something important, in particular is a clunker), and some may find its slow pace frustrating, or that it doesnt live up to its initial promise. But the film grew on me, and so did its characters. They werent just mouthpieces or pawns; when they talked, I wanted to know what they had to say. *****

Finally I saw an Israeli film called Six Acts. It tells the story of a wannabe coquette who enjoys the attention of her classmates but ultimately finds herself increasingly exploited by the men for whom she lusts. One in particular, a creepy misogynist, not only takes advantage of her anyway he can, but shows her off and practically rents her out to his friends. The film is structured around the six sexual acts referred to in the title, which start as lighthearted and fun and drift increasingly into darker territory. The films lead, Gili, is played affectingly by Sivan Levy. We hardly see her parents, from whom she seems distant and estranged, and she inspires a building sense of uneasiness as an increasing circle of lycanthropic boys gathers around her, each one suffering from a bad case of the Madonna-whore complex. If I have a problem with the film, it may be that it ultimately feels relentless in its portrayal of the male characters. While, I fear, there is a lot of truth in it, and women are no doubt often punished in life and in fiction for being so base as to have their own desires, there could have been more nuances among the think-with-their-dicks boys. But Levys performance and the confident direction stop her character turning into a hapless victim, and the film from turning into a banal morality tale. Expect more reviewing, pondering and rambling from my slice of this year's Film Festival through the week.
We need more writers about Reviews, Edinburgh Film Festival 2013, Not Another Happy Ending, Everyone's Going To Die and Six Acts! Get started below...
Contributor
Adam Whyte
Contributor
Twitter

I've been a film geek since childhood, and am yet to find a cure. Not an auteurist, but my favourite directors include Robert Altman, Ernst Lubitsch, Welles, Hitch and Kurosawa. I also love Powell & Pressburger movies, anything with Fred Astaire, Cary Grant or Katherine Hepburn, the space-ballet of 2001, Ealing comedies, subversive genre cinema and that bit in The Producers with the fountain.