There's three big requirements an actress has to meet to play X-Men character Emma Frost. She would have to be an unbelievable beauty, she must have a voluptuous figure, fire in her eyes shielding a darker side and a killer smile. (notice these are mostly physical attributes, because really... the character is one of the worst in comics). So Brit beauty Alice Eve, from She's Out Of My League, seems fitting enough to us. Deadline say Eve has begun talks with director Matthew Vaughn and 20th Century Fox for X-Men: First Class, where she would play the telepathic, dry witted, and massive bitch of the X-universe. She is dubbed The White Queen, and wasn't introduced until the 80's in the comics, and only then as a clear attempt to titillate the boys. As she started life in the X-comics as a villain, we are trying to figure out where her allegiance will lie in this movie. (read on for a big update on this movie)... We remember she made a cameo appearance in X-Men Origins: Wolverine last year, but we barely remember what happened. We think she appeared when Xavier saved trapped mutants at the end of the prequel alongside a young Cyclops, which may be the continuity reason why producer Bryan Singer has decided to push her into this movie (as most of the other characters come from the first issue of the X-Men in 1963). She is left on the following pic, alongside a young Cyclops and Angel... 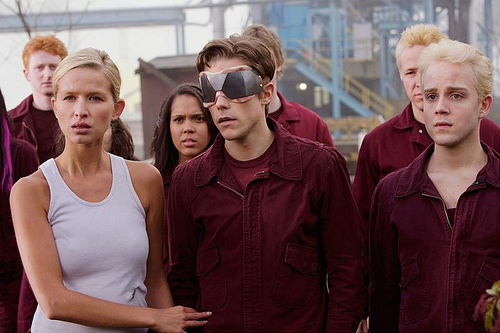 I'm guessing she might be a boyfriend of Scott Summers (Cyclops), who is devastated when he falls in love with Jean Grey leading to Frost going bad and joining Magneto's Brotherhood, but who knows and the fact she is considerably older (28 years old) than the rest of the young X-Men actors, I am prepared to be wrong about this. You may remember that Eve was shortlisted for the love interest role in Marvel's Captain America, before being tipped to the part by Hayley Atwell. Clearly Eve and her agent believe a large profile comic book role will do her career the world of good. Casting is coming in thick and fast now that production is gearing up in around six weeks. James McAvoy (as young Prof. X) and Michael Fassbender (young Magneto) lead, with Kick-Ass actor Aaron Johnson almost certainly on board as Cyclops (if he doesn't win the Spider-Man role he auditioned for last week), whilst 28 year old American actor Benjamin Walker has been cast as a young Hank McCoy (Beast). Andrew Garfield from Red Riding Trilogy and Fincher's upcoming The Social Network, we believe, has been offered the role of Angel... (previously played by Ben Foster in X-Men 3: The Last Stand)...

Jack Huston from Outlander and who had a supporting role in Twilight: Eclipse we think is being courted for Mastermind, an original member of Magneto's Brotherhood of Mutants who has the power to generate complex telepathic illusions. This character has yet to be used in the film series...

Eddie Redmayne who was recently cast in Spielberg's War of Horses only for the director to quickly change his mind, we can only think of as Toad, also for Magneto's Brotherhood... (previously played by Ray Park in X-Men).

Then we hit rumour territory, but strongly linked with roles are; The gorgeous and sure to be star of the future Amber Heard, whois heavily expected to play a young Mystique. Z-list actress Jasmine Dustin (she played "watermelon girl" in the last Iron Man movie) revealed Mystique was likely to be a character in the film after tweeting that she was auditioning for the part on June 15th...

"On my way to my X-Men audition...I think I can pull off Rebbecca Romijin's character...just a younger version! Wish me luck"

Former Bond girl Rosamund Pike is expected to play Professor X's assistant Dr. Moira MacTaggert after she was spotted outside of the casting offices with X-Men comics in hand. The part was played by Olivia Williams in X-Men 3: The Last Stand.

The really great thing about the movie Singer, Vaughn and Goldman have put together (although, I still say X-Men 4 is the way they should have gone, but oh well) is that they are consciously going back to the very first appearance of these characters. That very first X-Men #1 issue from Stan Lee and Jack Kirby that was published in 1963, and introduced the main core of characters that will feature in this movie. If you want to know the plot of X-Men: First Class I suggest you get into your comics archive and look back at that. The complete and original X-Men team that debuted in that issue were; Professor X, Cyclops, Iceman, Angel, Beast and Jean Grey. And Magneto's Brotherhood... Magneto, Toad, Mastermind, Quicksilver and Scarlett Witch. So presuming I'm right about how this movie is being put together, we can expect casting for Jean Grey to be imminent. And because of how Singer originally setup his X-Men film series, I think you can substitute Iceman (as he was already a young character in the original trilogy) and replace him with Storm, who would make far more sense in what we have to remember is a prequel and not a reboot.

And as far as Magneto's Brotherhood team goes... well with the Mystique audition, it's likely she has been added to the team, possibly as a replacement for Scarlett Witch. Which means we could see Quicksilver feature in the film, probably as character fodder for a death. Whenever a prequel movie is made, the fate of those characters you haven't seen before are always up in the air because for example, we know all of the original X-Men team survives as we've already seen them at later points in their life, so characters like Mastermind and Quicksilver could easily be sacrificial lambs. Oh, and we can't forget Sabretooth but maybe we are suppose to believe he is still fighting Wolverine somewhere??? X-Men: First Class will film late summer for a release June 3rd, 2011.
Want to write about matthew vaughn, Bryan-Singer, Movie News, X-Men: First Class, Michael Fassbender and Alice Eve? Get started below...
Editor-in-chief
Matt Holmes
Editor-in-chief
Facebook

10 Best Movie Characters Who Only Appear In Deleted Scenes