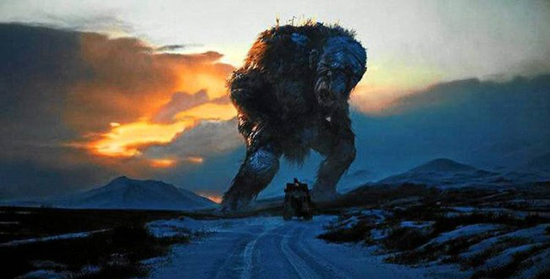 When you read that a film's title is The Troll Hunter, you probably don't begin to expect very much; bargain bin fodder, or at the very most, a low-fi schlock fest with just enough kitschy appeal to secure a theatrical release. Well, leave your prejudices at the door, because this audacious Norwegian monster pic is actually an exceptionally well-produced and somehow rather grounded take on the oversaturated found footage subgenre. Amazingly, director André vredal dares to tell his story with a completely straight face and miraculously manages to get away with it, an admirable feat given the thorough ridiculousness of the film in both name and concept. The Troll Hunter follows a group of students who are making a documentary about a reviled bear poacher operating in rural Norway named Hans (Otto Jespersen). However, when they finally catch up with him, they discover that he is in fact the titular troll hunter, and reluctantly, Hans allows them to follow him and document his work. What makes this film work and distinguishes it from similar efforts is that it is never trying too hard in any one direction; it boasts impressive visual effects for a production of this size but can hardly be called overproduced, the actors are credible while understated, and the film's tone doesn't push too hard to be either overly self-serious or comedic, while still presenting a considered and wholly interesting mythology. Sure, it pulls out plenty of the stock hand-cam bits we've seen better-executed elsewhere, such as night-vision video () and characters running frantically as the camera shakes near-incomprehensibly (The Blair Witch Project and just about everything in between), but the chilly Norwegian setting combined with the fact that, well, it's about trolls in rural Norway, gives it a unique, compelling hook.

While by title alone one would assume this to be a daft B-movie and nothing else, there's an unexpected mindfulness here which distinguishes it, especially an interesting political plot in which the government bureaucrats go to great lengths to hush up the trolls and their murderous rampages. The fact that the goons don't even seem to care that much about the protagonists filming all of the carnage, meanwhile, is either lazy writing or, more hopefully, a wry comment on how ubiquitous this sort of documentation has become in our lives now. Glimpses of the trolls themselves are rare, and it takes a while to get going, but the concept is followed through with such precision and is so well-developed that the most engrossing scenes often simply involve characters gassing; one in which the hunter unspools the whole troll mythos in a diner is just as thrilling as the action scenes which close the pic out. Overall, despite its obviously absurd antagonists, this feels a whole lot more authentic as a found footage film than most of its English-speaking counterparts; the gorgeous Norwegian scenery is both unsettling and serene all at once, while technical measures are made to give the coverage a more realistic and gritty feel, such as when the camera lens breaks and has to be replaced. This isn't Cloverfield, where the camera can take ridiculous levels of punishment. The Troll Hunter may sound like something you'd drunkenly chance upon at a midnight drive-in, but it's a consistently thrilling, surprisingly intriguing creature feature that demonstrates there's still plenty of wiggle room in the found footage subgenre.