This year's FrightFest took place at the usual haunt of Leicester Square's Empire between Thursday, August 22nd and Monday, August 26th, as thousands of bloodthirsty horror fans descended to get their annual fill of the goriest, most terrifying and uproarious thrills in town. As with any year at the fest, the regular bases are covered, with every sort of horror being catered for - there's psychological thrills, comic horror, flat-out gore-fests, foreign films, Hollywood blockbusters and so on. I caught 27 films at this year's fest, and we'll get started with the Thursday night closing film, You're Next... 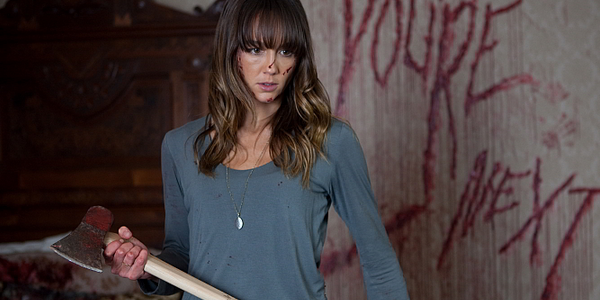 Having languished around on the festival circuit for almost two years, the latest effort from Adam Wingard (A Horrible Way To Die) has certainly had quite a journey coming to theatres, one that is (mostly) worth the wait. The Davison family are gathering at their luxurious vacation home to celebrate a wedding anniversary, and just as tensions rise at dinner time, the group is assailed by a crossbow-toting gang of mask-wearing lunatics, content on whittling their numbers down as quickly as possible. However, one of the home's guests, Erin (Sharni Vinson), proves oddly prepared for the assault, bringing with her a very special set of skills that just might see her survive the night. Though slow-moving in its opening portions, once You're Next gets going, it well and truly hits the ground running, indulging in countless scenes of brutal, wince-inducing violence, accompanied by a wealth of gallows humour. Even if the film indulges in plenty of the horror beats we've come to expect, it avoids many of the more woeful cliches we hope not to find; Erin, for one, is a smart, resourceful protagonist who frequently vetoes the other characters' less thought-out ideas, and typically the characters act in a way that is conducive to reality. The contrived theatricality of the villains is a little troublesome - namely that they wear masks that so clearly obscure their eyesight, and spend time writing "You're Next" in blood, in order to scare the victims - but on the whole, the much overdone home invasion scenario is pleasantly upended. By the time the rollercoaster ride of a third act comes around, twists abound, the tension reaches a breaking point, and Wingard lands at a departure point that is far from the prescribed formula. While it doesn't quite subvert genre expectations as much as it could have, You're Next delivers irreverent thrills by way of savage violence, lashings of dark humour, and a steely performance from Sharni Vinson.

There's certainly a fascinating film to be made about the titular 1959 incident - in which nine hikers perished under mysterious circumstances - but Die Hard 2 director Renny Harlin can't quite tease it out, in this half-baked found footage flick which brings back bad memories of last year's risible Chernobyl Diaries. The film follows a group of young filmmakers who aim to retrace the steps of the doomed hikers, and soon enough find themselves assailed by something; is it the government, aliens, or the "compelling, natural force" that supposedly claimed the lives of the original nine? Regrettably, Harlin seems less interested in probing the real-life incident and more so in using it as a backdrop for a relatively generic stab at the genre. Horror cliches soon enough begin stacking up - nobody listens to the sensible character, and the characters eventually split up - as well as immensely lazy, uninspired appropriation of found footage tropes (namely night vision). From start to finish, Harlin relies on thoroughly shopworn shocks, failing to make the most of the film's genuinely eerie premise and locale, with the third act especially borrowing liberally from some of the best recent works of the genre (especially the franchise). Though the film can't help but deliver some visual majesty by way of its creepy location work, clearly the visual effects budget was blown almost entirely on an impressive avalanche sequence mid-way through the film, because almost all other visual effects are laughable. Ultimately, The Dyatlov Pass Incident becomes increasingly silly and also somehow tedious, leading to a disappointing final reveal, and an unintentionally amusing head-scratcher of an ending. Despite drawing influence from a fascinating real-life event, this sloppily directed, largely tension-free found footage film sticks too closely to genre formula.
Contributor
Shaun Munro
Contributor
Twitter