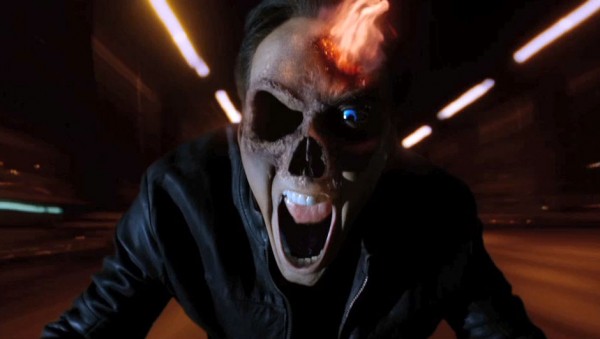 Those thinking that Nicolas Cage could not possibly outdo his own badness following last years disastrous Season of the Witch should think again, for this ludicrously unnecessary, scarcely comprehensible sequel to the mediocre 2007 comic book outing Ghost Rider is his stiffest competition since. Already a firm contender for worst film of the year, Spirit of Vengeance musters low expectations, and inexplicably still fails to meet them. If there was any beacon of hope that this sequel might be a more diverting excursion than the tiresome original, it is the peculiar decision to have Mark Neveldine/Brian Taylor  the demented minds behind the wonderfully irreverent Crank films  directing the carnage this time around. Less known for high-budget finesse and more for the barely-controlled, amusingly sloppy handheld work employed on their Statham-starrers, the dappy duo are a curiously dangerous choice with which to saddle a $75m blockbuster (albeit one reportedly slashed from $135m). That they make little effort to change-up their style  aside from utilising more expensive, higher quality cameras  is refreshing, and a diverting choice with which to shoot a superhero film, though it is one which I expect will dent its commercial appeal. However, the praise begins and ends with its stylistic audaciousness, for while it might be intentionally messy from a visual perspective, the script, tethered to some risible acting, makes for a depressingly inconsequential schlock-fest, and more to the point, one lacking the giddy self-awareness of the directors other works.

Nicolas Cage returns as the titular Ghost Rider aka Johnny Blaze, who must this time prevent the Devil (Ciarán Hinds, essentially replacing Peter Fonda) from locating his son, Danny (Fergus Riordan), on Earth and imparting his own demonic essence into him. While the premise is simple and in of itself makes sense, the script pads the runtime out with horrid dialogues  rendering even talented thesps like Idris Elba temporarily unbearable  and incoherent action scenes which only occasionally embrace the pulpy silliness of the material (one such moment has Blaze riding a missile into the sky that is fired at him rather than, you know, exploding). Abandoning even an expectedly cursory effort to make us identify with the situation at hand, character development here is virtually non-existent; we dont get a feel for who Danny is or how he feels about this situation, and more distressingly, nor do we get any insight into his mother, Nadya (Violante Placido), who essentially serves as eye candy and little more. The actors merely chew through the mechanical, cheesy dialogue with minimal effort, transporting us from one stifled, abrupt set-piece to the next. Even an enticing cameo appearance from Christohper Lambert as a tattooed, bald monk isn't any fun because they don't give him anything interesting to do. Most disappointing, though, is the lack of zaniness on Cages part. Once again sleep-walking his way through a role, and indeed, one which should allow him to unrestrainedly unleash his much-applauded mad side, theres only one single, one-minute scene which has Cage in full-tilt Bad Lieutenant mode. For the rest of it, he operates at a sub-Trespass-Justice standby-setting of mediocrity, unable to muster up false enthusiasm even for our sake, and seemingly just as bemused at the inanity of the dialogue.

This is that rare post-X-Men superhero picture which cannot even satisfy the basic audience requirement for a showy spectacle. When not bogged down in maddeningly dull dialogue exchanges, Neveldine/Taylor rest on their idiosyncratic sensibilities to see them through; we get some short animated sequences which are solid visually though ill-advisedly surrealist, conjuring up an absurd image of Jerry Springer as the Devil which feels both incongruous and dated as a critique. This all wastes screen time in a film which should emphasise the batty, over-the-top, hyper-stylised action that is ultimately putting bums in seats. What doesnt help is a mid-film sub-plot which has Blaze deprived of his powers, stopping dead in its tracks any and all sense of fun. The mayhem as a result is generally deployed in fits and starts, only really coalescing in a final vehicular show-down between Blaze and Blackout (Johnny Whitworth), which flings 3D cars all over the place, but is marred by poor visual effects, sloppy editing, and a third dimension that appears invisible far too often. Lacking even the perverse pleasure of a memorable Nicolas Cage performance, this messy superhero pic conjures unpleasant memories of what was until now Marvels biggest comic book failure, Elektra.